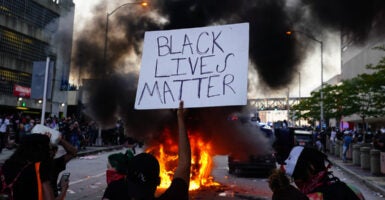 Political activists who call for defunding police and ending what they call systemic racism used the banner of Black Lives Matter to raise tens of millions of dollars and launch a political action committee, according to the main organization’s “2020 Impact Report.”

In an introduction, Black Lives Matter co-founder Patrisse Cullors says the radical organization believes that “white supremacy is currently sanctioned by our systems and even by some of our elected officials.”

But the foundation now has what its leadership describes as a sister organization called Black Lives Matter Grassroots, which includes state chapters across the U.S. and Canada.

The 2020 Impact Report, while not detailing Black Lives Matter Global Network Foundation’s progress under “guiding principles” to boost the LGBT agenda and undermine traditional family structure, includes a message from the grassroots group about its relationship with the foundation:

The Impact Report from Black Lives Matter Global Network Foundation goes into detail on how it and the grassroots organization worked in partnership to change public policy, efforts that include offering curriculum for public schools.

Here are six major takeaways from the goals covered in the foundation’s report.

Black Lives Matter raised $90 million in 2020 from corporations, other organizations, and individuals, with an average donation at $30.64 and more than 10% of donations recurring, according to the report.

The report says Black Lives Matter Global Network Foundation had $8.4 million in operating expenses in 2020 while disbursing $217 million in grants to more than 33 other organizations.

The foundation spent $2 million on efforts to get out the vote in the 2020 elections. After grant disbursements and expenses, the organization reported a balance of about $60 million.

“Few foundations will disperse more than 8% of their total assets,” the report says. “For BLMGNF to have committed 23% of its assets is groundbreaking. We are no longer a small, scrappy movement. We are an institution. We are mature.”

The Black Lives Matter movement assumed a prominent position in the protests following the May 25 death of George Floyd, 46, in police custody in Minneapolis. Police said Floyd, who was black, resisted arrest after being detained on suspicion of committing forgery.

The “Black Lives Matter” slogan first gained notoriety after the 2012 fatal shooting in Sanford, Florida, of Trayvon Martin, a black high school student. George Zimmerman, then 28 and a neighborhood watch coordinator for his gated community, argued that he acted in self-defense in shooting Martin, 17.

A jury acquitted Zimmerman of all charges in 2013. Activists Patrisse Cullors, Alicia Garza, and Opal Tometi founded Black Lives Matter as an organization in response to the verdict. Cullors currently is executive director.

The Black Lives Matter PAC, which started up in October, endorsed successful political candidates while placing paid advertisements on a variety of platforms including social media, radio, and billboards.

A total of 44 of its endorsed candidates and ballot measures prevailed, according to the report.

Referring to the PAC, the report says:

Our launch came as we were preparing to roll out our GOTV [get out the vote] campaigns. While we launched our GOTV work through our C3 entity, Black Lives Matter Global Network Foundation, founding a PAC allowed us to run the kind of voter awareness campaign we felt was necessary for this cycle.

From our public announcement to the end of the year, we raised a total of $1.05 million. From this $1.05 million, we have spent just over $746,000 across our campaigns in the general election and the Georgia Senate runoff.

The two U.S Senate races in Georgia, in which liberal Democrats Jon Ossoff and Raphael Warnock unseated Republican incumbents, were a major priority for the organization.

Georgia experienced “historic turnout” driven in part by black voters, the report says, adding that the PAC “served as convener and facilitator” for “a coalition of black-led organizations” active in the Senate races.

In Pennsylvania, volunteers worked in 195 shifts, according to the report. The effort there produced 2,674 conversations, 2,635 pledges to vote, and 1,902 pledges to text friends and family about the election.

Black Lives Matter also was active in Fort Lauderdale and the surrounding area in Florida, where “a team of 30 canvassers knocked on the doors of 2,826 African American voters that were recognized as having not voted.” The canvassers “had 555 conversations.”

Federal legislation called the BREATHE Act signals the Black Lives Matter Global Network Foundation’s first entry into the legislative arena. The foundation is working in partnership with Movement for Black Lives, an umbrella organization of 50 left-of-center groups, to push the bill.

Supporters in Congress include Reps. Ayanna Pressley, D-Mass., and Rashida Tlaib, D-Mich. Movement for Black Lives released its own detailed summary of major sections of the bill, but no official legislative summary has been posted.

Black Lives Matter describes the proposal as a “legislative love letter to black people” and a “civil rights bill.” The bill calls for “divestment from our policing systems” in exchange for “new forms of public safety.”

“I think BLM will continue to push for this ill-advised measure,” Mike Gonzalez, a senior fellow with The Heritage Foundation, said in an email to The Daily Signal.

“But defunding the police is the least of the problems BLM causes,” said Gonzalez, who has written about links between Black Lives Matter co-founder Alicia Garza and U.S.-based groups that support the Chinese Communist Party. “Its activism in 2020 has completely changed the country, school curriculum, even sports.”

Black Lives Matter also burrowed in at the local and state levels to influence public policy. In South Bend, Indiana, for example, activists won creation of a Community Police Review Board with what the BLM report describes as “investigatory subpoena powers.”

The report says of the South Bend City Council’s approval of the oversight board:

This board is the only police review board in the country held in the office of the city clerk. In other cities, we are successfully pressuring city councils to replace law enforcement officials with community-based, unarmed emergency responders in instances of non-violent calls for service.

Three counties in Michigan adopted resolutions declaring racism to be a public health crisis in response to pressure from Black Lives Matter. The organization also secured a pledge from the Los Angeles superintendent of schools to cut $25 million from the school policing budget.

Black Lives Matter started a petition in May to end “systemic racism,” pulling in 2.5 million impressions on Twitter.

Although the Black Lives Matter Global Network Foundation previously identified chapters in 12 states, one in the nation’s capital, and three in Canada, BLM Grassroots appears to have stepped in to assume control of state chapters.

The Global Network Foundation “has decided to fully lean into its capacity as a fundraising body, grantmaking entity, amplifier, and action-oriented think tank of the movement,” Cullors, the executive director and co-founder, explains in an opening statement in the report.

“In separating the streams of movement work across these two entities—without elimination or departure—we remain true to our origin story and our developed strengths through the growth of the movement,” she says.

In addition to Canada and the U.S., Black Lives Matter is active in the United Kingdom.

“White supremacy” is a major theme of Cullors’ opening statement, in which she tells supporters that this problem will not be resolved entirely by legislation:

But we do believe one thing: white supremacy is currently sanctioned by our systems and even by some of our elected officials. By engaging directly with our different political systems–by directly challenging them–we want to communicate and affirm that white supremacy has no space in the ways we govern, cooperate, and live.

This effort involved an extensive social media and email campaign. The Global Network Foundation said it made history when it submitted a letter to the congressional record expressing opposition to Amy Coney Barrett’s nomination to succeed Ginsburg on the high court.

The Senate voted Oct. 26 to confirm Barrett 52-48, with only one Republican opposed.

The Daily Signal sought comment on membership and other issues from the Black Lives Matter Global Network Foundation as well as an unnamed contact listed on the Facebook page for Black Lives Matter Grassroots. The organizations had not responded by publication time.

The BLM Grassroots group’s Facebook page links to another site devoted to “Defund the Police” initiatives.

A sentence in this article was clarified to reflect that a founder of Black Lives Matter has ties to U.S.-based groups that support the Chinese Communist Party.