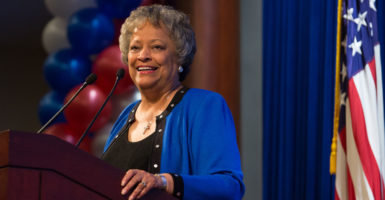 "All of us who are good people, who love this country, want to get it right. We want to lean into this moment," says Heritage Foundation President Kay C. James, pictured here at another event. (Photo: Willis Bretz for The Heritage Foundation)

Kay C. James, the first black president of The Heritage Foundation, strongly discouraged corporate donations to a radical Black Lives Matter organization, noting its Marxist origins, and suggested instead that the companies “fund the good guys and defund the bad guys.”

In a wide-ranging webinar interview this week with Gary Shapiro, president of the Consumer Technology Association, James also talked about The Heritage Foundation’s National Coronavirus Recovery Commission and the nation’s political polarization, among other matters.

When the COVID-19 pandemic struck, Heritage set up the 17-member National Coronavirus Recovery Commission, which James called the “most diverse group of individuals” because of their experience in government, business, religion, and health care, saying:

We believe that some of the best answers are not going to come from government, but come from nonprofits, come from corporations, come from our community organizations. We are seeing that now, by the way. So, we are hoping that [commission] document might be a guide, not only for this pandemic but for future pandemics as well. …

James, a former federal and state official, became president of The Heritage Foundation in January 2018 after years as a member of the leading conservative think tank’s board of trustees. The Daily Signal is Heritage’s multimedia news organization.

James also decried the vitriol in public discourse and said she tries to teach young people—regardless of their politics—to be “solutionists,” her term for problem solvers, rather than shouting talking points from the left or the right.

In the interview three days after the Fourth of July, James praised the United States and the nation’s founding while acknowledging ongoing challenges.

James, 71, recalled the sting of racial discrimination from teachers during school desegregation in Virginia when she was in the seventh grade. Problems persist, she said, noting that her 14-year-old grandson was called the N-word in school this year:

We are an exceptional nation. But are there people in this country who still have a problem with race? You better believe it. All of us who are good people, who love this country, want to get it right. We want to lean into this moment. It doesn’t mean we hate our country, because we don’t. This is the best country in the world. I adore it. I love it. I bleed red, white, and blue. …

James warned American businesses “not to be blinded” into alleviating guilt by contributing to the Black Lives Matter Global Network Foundation, the primary organizational structure behind the movement.

“To see a corporation give millions and millions of dollars to the BLM organization, the Black Lives Matter organization, which was started by Marxists, which hates corporate America … you are funding the beast,” she said.

James referred to the Black Lives Matter Global Network Foundation’s own statements against the nuclear family and in opposition to Israel.

“They say—I do not say—they say they are Marxists. So, why in the world would a corporation give money to an organization like that? It’s counterintuitive,” James said. “I recognize that corporations want to be socially relevant. But they’ve also got to be smart. Fund the good guys, defund the bad guys.”

Some businesses are being co-opted by political missions, James said. She referred to Google employees who opposed her membership on Google’s artificial intelligence advisory council, leading to its quick demise, as well as YouTube’s removal of a Heritage Foundation video on transgenderism that was medically accurate.

The most important role for business is business, she said in the interview:

You got into this to make money and to grow a business. Why is that important? Why is that significant? Because government doesn’t produce wealth. Businesses do. So, all of those wonderful things that we love in our civil society are funded by the private sector—our universities, our museums, our symphonies, our nonprofit organizations. So, the main thing I want you to do is be profitable and to use those profits for the greater good, for human flourishing.

The webinar is part of the “Masters of Leadership” series sponsored by the Arlington, Virginia-based Consumer Technology Association and the Northern Virginia Technology Council.