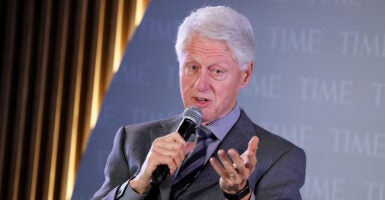 Former President Bill Clinton will co-host an event on women’s empowerment, despite the allegations of sexual assault and rape against him. Pictured: Clinton speaks during the Time 100 Health Summit Oct. 17, 2019, in New York City. (Photo: Brian Ach/Stringer/Getty Images)

The Daily Caller News Foundation reached out to a number of prominent women’s groups regarding the upcoming Clinton Global Initiative event, including Planned Parenthood, Emily’s List, the Women’s March, Time’s Up Now, the Center for Reproductive Rights, the National Abortion Rights Action League, and the American Civil Liberties Union.

None of these organizations have spoken out against Clinton’s upcoming appearance, though they clamored to support Christine Blasey Ford in September 2018 when she accused Kavanaugh of sexually assaulting her in high school.

These organizations did not respond to repeated requests for comment from The Daily Caller News Foundation on Wednesday. Most of the organizations also remained silent when President Joe Biden and Democratic New York Gov. Andrew Cuomo faced sexual misconduct allegations.

We were planning to shut down the Capitol Building but the authorities were so scared of this #WomensWave that they shut it down for us.

1000+ women, survivors, and allies have gathered in the Hart Senate Building.
Every hallway. Every floor.#CancelKanavaugh #BelieveSurvivors pic.twitter.com/rIwjBht6e7

The former president, who has denied all of these allegations, also faced suspicions about his relationship with convicted sex offender Jeffrey Epstein, who died in jail in 2019 from apparent suicide.

To all survivors of sexual assault: We believe you. We’re here for you. It’s not your fault. #MeToo pic.twitter.com/bzzmctT6TD

“It’s really not the focus of this event today. It’s a political campaign, I’m sure there’s going to be all kinds of mud everywhere,” Richards told Time in 2016.

But to me, reason we’re endorsing her today—the reason why hundreds of people across this country got together—is because Hillary Clinton is a longstanding champion of women’s health and women’s rights and not just planned parenthood: equal pay, access to birth control, access to safe and legal abortion.

The women’s and abortion advocacy group Emily’s List has a page on its website dedicated to Bill Clinton, praising him for working “to ensure that women had a seat at the table as they never had before, appointing women to top spots and seeking their input in major policy decisions” and highlighting Clinton’s praise for Emily’s List founder Ellen Malcolm.

Emily’s List also had Clinton deliver the keynote address at its 2016 annual gala and awards dinner.