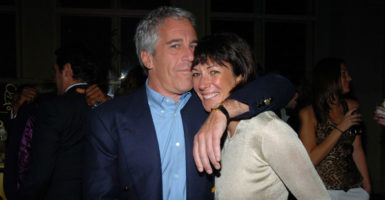 Jeffrey Epstein, pictured with Ghislaine Maxwell in 2005, died this weekend in prison, leaving plenty of questions about how he died while in federal custody. (Photo: Joe Schildhorn/Patrick McMullan/ Getty Images)

After the assassination of Abraham Lincoln, investigators discovered that the lone man assigned to guard the president, John Parker, had abandoned his post to watch the play from an adjacent box at Ford’s Theater.

Worse, at intermission, Parker adjourned to a nearby saloon to have drinks with some friends. It was during the second act that John Wilkes Booth entered the president’s box and shot him.

Maybe something as simple and explainable as that will be the conclusion of an investigation into the death of billionaire financier and convicted sex offender Jeffrey Epstein in a Manhattan federal prison.

Attorney General William Barr has ordered the FBI to look into how someone so recently on suicide watch, but later removed, could hang himself in his cell when he was supposed to be monitored.

Among numerous questions: What method did Epstein use? Was there a chair in the cell and if so, why? Was there something on the ceiling that a sheet, or rope, could go over? How did Epstein obtain a sheet or rope? Was it really suicide?

An unnamed source working as a chaplain in a Los Angeles psychiatric hospital responded to my inquiry concerning monitoring protocols:

I have seen and know the protocols for suicidal patients and usually they are given meds to keep them calm. The patient is not simply under observation but is physically watched 24/7 … not every 10 minutes or 30 minutes, but minute by minute. I can’t even give them a Bible with a hard cover or even a rosary … there’s no way to commit suicide without help from someone else … this is wrong!

In a tweet, the president, who knew Epstein, but claims they had a falling out some years ago, tried to link Epstein’s death to former President Bill Clinton. That one quickly began trending on Twitter, mostly because so many people associated with the Clintons have died, some under curious circumstances.

Not all conspiracy theories turn out to be wrong. If one is known by the company one keeps, those named in recently released court documents that visited Epstein’s “fantasy island,” allegedly stocked with underage girls, were pretty bad company. Those named deny the allegations, but given the details of witnesses and the known behavior of some of them, that hardly seems credible.

Now that Epstein is dead, perhaps some are breathing a little easier knowing he won’t have to testify at trial and be asked whether he served as a pimp to the wealthy and well-connected.

FoxNews.com alleges there is more to come:

Former President Bill Clinton was a much more frequent flyer on a registered sex offender’s infamous jet than previously reported, with flight logs showing the former president taking at least 26 trips aboard the ‘Lolita Express’—even apparently ditching his Secret Service detail for at least five of the flights …

Clinton’s presence aboard Jeffrey Epstein’s Boeing 727 on 11 occasions has been reported, but flight logs show the number is more than double that, and trips between 2001 and 2003 included extended junkets around the world with Epstein and fellow passengers identified on manifests by their initials or first names, including ‘Tatiana.’ The tricked-out jet earned its Nabokov-inspired nickname because it was reportedly outfitted with a bed where passengers had group sex with young girls.

It would be a convenience, to say the least, for Epstein to be out of the way before his trial and it wouldn’t be the first time someone got knocked off in prison for revenge or to guarantee their silence. Whitey Bulger, the Irish-American crime boss, was killed by inmates shortly after arriving at the U.S. Penitentiary, Hazelton, in West Virginia, last October.

Let the investigation begin, let it be thorough, and let it be conducted without favor to anyone.