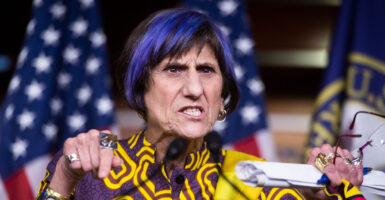 Conservatives say that congressional Democrats’ bid to revive legislative earmarks must be fought “100%” by Republicans.

“Earmarks are about power, waste, and corruption,” Rep. Ted Budd, R-N.C., said in a statement provided to The Daily Signal.

If Democrats want to refill the D.C. swamp with porkbarrel earmarks, then Republicans need to draw a clear line in the sand and oppose them 100%.

I don’t think taxpayers will forgive Congress for bringing back one of the most wasteful and corrupt practices in the history of this body.

Conservatives have long opposed earmarks, which direct taxpayer money to lawmakers’ special interests and projects through the budget without competition based on merit. Lawmakers banned earmarks under House rules in 2010.

The House Appropriations Committee “will begin receiving up to 10 requests from each lawmaker who wants to try to secure these narrowly cast funding projects,” according to a March 13 report in The Washington Post.

“Members of Congress bring deep, firsthand understanding of the needs of their communities and know what projects will have the greatest impact,” Rep. Rosa L. DeLauro, D-Conn., chairwoman of the House Appropriations Committee, wrote in a memo to fellow lawmakers, the Post reported.

Rep. Chip Roy, R-Texas, said in a statement provided to The Daily Signal that the effort to bring earmarks back is completely partisan.

“With razor-thin majorities in both houses of Congress, it’s no surprise that Democrats want to bring back earmarks, which amount to little more than legislative bribery,” he said.

If reinstated, Roy said, earmarks “will be used as currency for votes as Democrat leadership buys off moderates who do not support their party’s radical policy agenda.”

This chamber has already made it clear that it is no longer the People’s House in any true sense, but consolidating even more power in party leadership would be another institutional embarrassment on a list that’s already too long.

The Republican conference should reject any participation in these swamp games and work to restore fiscal responsibility in Congress.

But Rep. Ralph Norman, R-S.C., told The Daily Signal he is so opposed to earmarks that he has introduced legislation to eliminate them.

“Congress has a constitutional responsibility to determine where and how our tax dollars are spent,” Norman said.

Unfortunately, the way we appropriate federal dollars has deteriorated into a national embarrassment. It amazes me that Congress seeks to restore earmarks, but apparently has no desire to restore regular order to the appropriation process.

This is sure to lead to more corruption and mismanagement of taxpayer dollars, which is why I am proud to have introduced the Earmark Elimination Act.

Sen. Joni Ernst, R-Iowa, said that there is nothing fiscally responsible about earmarks.

“Earmarks are corrupt, costly, and inequitable—and there’s simply no reason to go back to the old, wasteful, and detrimental ways of earmarks,” Ernst said in a statement provided to The Daily Signal.

“Instead, we should permanently ban the bacon from the legislative process, and finally put an end to one of Washington’s swampiest traditions,” she said.

“Conservatives do not support congressional attempts to return to the practice of earmarking,” the Feb. 24 letter read.

We urge all congressional Republicans to oppose this effort—and to do so by publicly joining a letter in opposition led by Sen. Ted Cruz, Rep. Ted Budd, Rep. Lauren Boebert, Rep. Andy Biggs, and Rep. Chip Roy.

Regardless of what Democrats do, Republicans should maintain their conference rule that prohibits their party’s use of earmarks, and oppose every effort to overturn it.