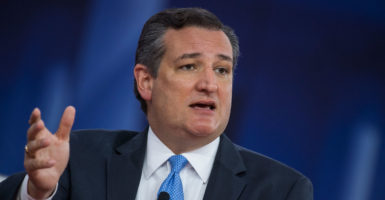 All but a relative few farmers and other rural residents have had electricity and telephone service for a generation, but the U.S. government devoted $10 million in the current budget to a duplicative Rural Utilities Service program designed to help pay for energy costs.

Taxpayers continue to finance the program even though then-President Barack Obama tried to eliminate the High Energy Costs Program in 2013 because it duplicated the U.S. Electric Loan Program.

The program buried in the Agriculture Department budget is brought to the surface in the “2018 Congressional Pig Book” compiled by Citizens Against Government Waste, a watchdog that has put together the catalog of pork, earmarks, and other questionable federal spending since 1991.

“Earmark spending, deficits, and debt all grow when the lights are turned off—all grow when attention is focused somewhere else,” Sen. Ted Cruz, R-Texas, said Wednesday at the organization’s press conference announcing the new edition.

“What earmark spending, deficits, and debt loathe more than anything is sunshine, is being revealed,” Cruz said. “Because that sunshine has a disinfectant effect.”

The 2018 #PigBook has been released! Find out why this little pink book makes Washington squirm… https://t.co/Fiwzzvv0w6

At this rate, within two years, lawmakers will pass their $29 billion record in earmark spending set in 2006, Schatz said.

Some of the more egregious spending included in the new “Pig Book”:

—$2.7 billion for the Joint Strike Fighter program to add 20 F-35 fighter jets. The program, in place for 17 years and seven years behind schedule, so far has cost more than $406 billion, close to double an initial estimate of $233 billion.

“An April 2015 Government Accountability Office (GAO) report noted that the lifetime operation and maintenance costs of the most expensive weapon system in history will total approximately $1 trillion,” the Pig Book states.

—$65 million for the Pacific Coastal Salmon Recovery Fund within the National Oceanic and Atmospheric Administration, which the White House found was “not optimally targeted” and favored “certain species and geographic areas over others.”

Lawmakers should direct funds to programs and projects with “the greatest need or potential benefit,” the Pig Book says.

—$663,000 for a program to eradicate the brown tree snake in the island territory of Guam. “The snakes are native to northern Australia, Indonesia, and many of the islands in Melanesia,” the Pig Book states, “but have caused damage to the ecosystem of Guam, where they were likely introduced by the U.S. military following World War II.”

“The annual ‘Pig Book’ has been described as the most unpopular book in Washington,” said Cruz, congratulating Citizens Against Government Waste for revealing “some of the worst pork spending” in the federal budget over the years.

“With some politicians, I guess that might make it tied with the U.S. Constitution and third-grade arithmetic, all of which they hope to be able to disregard,” Cruz quipped.

“But for those of us who fight every day for fiscal sanity, who are trying to bring some order to government spending and to stop the pattern we have seen decade after decade of bankrupting the next generation, the ‘Pig Book’ is an invaluable tool and resource,” the Texas Republican said.

In some cases, lawmakers offer “fewer details, less transparency, and more secrecy” about surviving earmark spending, Schatz said, as has been the case since fiscal 2011, when they supposedly placed a moratorium on new earmarks in the budget.

In publishing its annual exposé on “egregious” pork barrel spending, Citizens Against Government Waste highlights spending that was requested by only one chamber of Congress, wasn’t the subject of hearings, or serves only a local or special interest, among other criteria.

“What we hope to accomplish is a permanent ban on earmarks,” Curtis Kalin, the group’s director of communications, told The Daily Signal in an email.

Some lawmakers want to do this to “grease the wheels” for more bipartisan compromise on spending fights, Boccia said in an email to The Daily Signal.

“Since Congress banned earmarks, lawmakers have still found ways to sneak their pet projects through the broken federal budget process, to the detriment of current and future taxpayers,” she said, adding:

Earmarks are a vehicle of cronyism and political favors, lining the pockets of corrupt politicians, while feeding a swamp that is undermining American families’ ability to achieve their version of the American dream. … Looking the other way when waste and cronyism are rampant in federal spending is both morally and ethically wrong.

.@RepJimBanks: It’s laughable that DC insiders say that bringing back earmarks is the only solution to gridlock. #PigBook