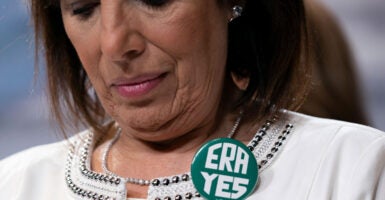 The Equal Rights Amendment is nothing more than a solution in search of a problem. Pictured: Rep. Jackie Speier, D-Calif., wears a pro-ERA button as she waits to speak at a press conference Feb. 4, 2020. (Photo: Alex Edelman/Getty Images)

With all that’s going on these days, and with the narrowest majority in half a century, you’d think House Democrats would be a little more focused on accomplishing something real and tackling some of the actual challenges we face.

Instead, they are holding another vote related to the Equal Rights Amendment, which, even if it could do what its backers claim, would be nothing more than a solution in search of a problem.

>>> Update: The House voted 222-204 on Wednesday, largely along party lines, to remove the expired deadline for ratifying the Equal Rights Amendment.

Amending the Constitution is a difficult, two-step process. Proposing an amendment requires two-thirds of Congress or a convention called by Congress when two-thirds of the states apply for one.

Ratification requires an even larger supermajority: Three-fourths of the states must approve a proposed amendment before it can become part of the Constitution. Of the thousands of suggested amendments, Congress has proposed only 33 and the states have ratified just 27.

From its first introduction in 1923, the goal of the Equal Rights Amendment was to achieve legal equality between men and women by eliminating concrete “discriminations” that treated them differently. Neither legislatures nor courts, supporters said, would move in that direction without the Constitution’s command.

Both legislatures and courts, however, did just that without the ERA. The National Women’s Party, which drafted the original constitutional amendment, submitted a report to a 1945 House hearing documenting “progress already made in equalizing laws which formerly applied to one sex only.”

The National Women’s Party acknowledged that “the trend toward the complete equalization of the laws is unmistakable.” Lower courts began in the 1960s to interpret the 14th Amendment as covering sex discrimination as well as racial discrimination.

So by the time Congress finally proposed the Equal Rights Amendment in March 1972, it was being overtaken by legislative and judicial events. To gain more support, Rep. Martha Griffiths, D-Mich., agreed to include a seven-year ratification deadline, a feature in many ERA resolutions since the 1940s. Still, she predicted that “this amendment, if passed, would be ratified in less than two years.”

It wasn’t. Even a 1978 resolution to extend the deadline by a few years failed to add any more support. As the Congressional Research Service repeatedly has noted: The ERA “formally died on June 30, 1982.”

No, a separate resolution to do that was introduced by a different House member. House Joint Resolution 17 pretends that the dead 1972 ERA resolution is not only alive but somehow still pending in Congress.

Although Congress, as a general matter, has authority to amend bills and resolutions, it can do so only if such a bill or resolution is alive and on Congress’ legislative plate. Congress, for example, can consider or change bills or resolutions before they are passed and signed into law.

During the 116th Congress, the “frequently asked questions” on the website of the clerk of the House of Representatives asked: “When does a bill become ‘dead’ or no longer open to consideration?” The answer was that a bill is “eligible for consideration” until the Congress in which it was introduced “ends or adjourns.”

A fact sheet from the NAACP puts it this way: “Once a Congress adjourns, however, at the end of its two-year cycle, all bills that have been introduced … that have not made it through the entire legislative process … are dead.”

The Congressional Institute agrees: “When one Congress expires, all the pending legislation goes with it.” That adjournment “permanently ends consideration of any bills that had not been passed yet.”

Supporters’ counterargument—that the fact that Congress changed the ratification deadline before shows it can do so now—has two fatal flaws.

Second, the only court to rule on the question held that the deadline extension from 1979 to 1982 was unconstitutional.

A 2016 report adopted by the American Bar Association explained that the Supreme Court set aside that 1972 decision without ruling on its merits because “the ERA was dead.” The ratification deadline was, in fact, a deadline. Once it passed, the 1972 ERA died.

The Equal Rights Amendment died because the two reasons offered by its supporters for its necessity were being accomplished without the constitutional amendment. That left only the unknown mischief that its vague language could be used to achieve.

In other words, the ERA’s costs outweighed its benefits. Advocates can renew that fight if they choose, but will have to do it the right way by starting the amendment process from scratch.

Congress, however, cannot amend a resolution that no longer exists.