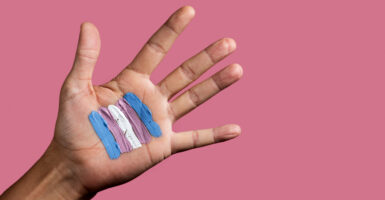 NPR promoted a new "trans lit" novel twice over, since NPR is a taxpayer-funded sandbox for the Revolution. (Photo: Getty Images)

Our dominant media’s celebration of transgender people must inevitably include the distorted sounds of our tastemakers becoming transfixed by trans fiction.

Exhibit A is a new novel titled “Detransition, Baby” by trans woman Torrey Peters. It’s published by One World, an imprint of Random House. “The mission of ONE WORLD,” its website says, “is to provide a home for authors … who seek to challenge the status quo, subvert dominant narratives, and give us new language to understand our past, present, and future.”

Subverting the “dominant narrative” of the gender binary draws many earnest, if unsurprising, endorsements — from Vox, BuzzFeed, O: The Oprah Magazine and so on. The publisher especially likes The New York Times Editors’ Choice blurb from “trans lit” author Andrea Lawlor, who proclaims, “‘Detransition, Baby’ might destroy your book club, but in a good way.”

Let’s attempt to explain the plot, although it’s a quintessential blur:

1. Ames was born James but transitions to Amy for a few years, until he “detransitions” to Ames. This signals that he’s “distanced from himself.”

2. Reese, also a trans woman, is Amy’s lover, but they break up over the detransitioning.

3. Katrina is Ames’ boss, whom Ames impregnates after an office party, having told her that all those hormone blockers probably made him sterile. Obviously, they hadn’t.

4. Ames proposes to Reese and Katrina a parenting throuple of sorts. “Could the three of them form some kind of unconventional family — and raise the baby together?” the book description reads.

Now everyone on the libertine left wants to be part of an “evolution” in the literature of “marginalized people.” NPR promoted this novel twice over, since NPR is a taxpayer-funded sandbox for the Revolution. First came a 34-minute author interview on March 2 on the Sam Sanders podcast, “It’s Been a Minute.” Then, Sanders did a shorter promotional report on the “news” show “Morning Edition” on March 8.

Sanders touted the “trans lens” that the author brings to educate the masses, saying, “Torrey has noticed this trans lens more and more in the wider culture, this understanding that gender is not fixed, that it can be performed and presented in many ways.”

Gender is a “performance,” not a biological fact. Thanks to NPR and the rest, Peters insists we’ve arrived at the moment “where the dominant culture begins to understand itself through the terms set by the marginalized culture,” and that we should now define ourselves by the lights of “queer scholars.”

The NPR host did raise one expected critique from the left: that the subject of detransitioning could be used as an “aha” moment for right-winger critics. Peters insisted that “in order to detransition, you have to first transition. So therefore, detransition belongs to trans people. It’s ours. And we shouldn’t let other people weaponize it against us.”

Grooving on the usual NPR vibe, Sanders and Peters agreed the “strict nuclear family” paradigm “isn’t working.” The incoming new age will reject “constraining gender roles” and welcome an inevitable arrival of — wait for it — “heteropessimism.”

It should not be shocking that the next step is Hollywood “trans lit” translated into television. The leftist producers at Anonymous Content are developing the novel as a television series, a “half-hour dramedy.” Torrey Peters is an executive producer for the series and will write the pilot episode. Husband-and-wife team Joan Rater and Tony Phelan (of ABC’s “Grey’s Anatomy”) will also be executive producers and serve as showrunners.

This is another reason why a new Gallup poll found that almost 16% of Generation Z adults (ages 18 to 23) identify as LGBT. The propaganda mill for “heteropessimism” is picking up speed. Can a traditionalist Resistance make this a debate?