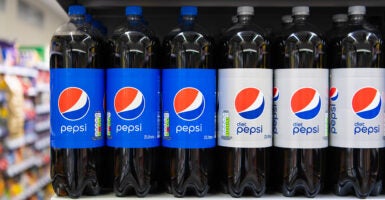 They used to call it “retail therapy.” But for conservatives, there’s nothing therapeutic about walking the aisles of stores that want to shut down your speech, cancel your bank accounts, or send cents on every dollar to Marxist groups who despise America.

In an age when conservatives can’t turn on the TV, send their kids to school, check their Facebook feeds, or watch sports without being reminded about the wokeness of corporate extremists, it’s no wonder they’re fed up. And fed up—Gallup warns—is exactly what they are.

It used to be “cool and countercultural” to be liberal in corporate America, Dave Seminara pointed out. “Today, the left is the establishment—and conservatives are [the] new counterculture that quietly seethes as companies we patronize inundate us with … virtue signaling.”

Most people don’t expect or even want corporate America to embrace conservatives causes, The Wall Street Journal’s editorial board agrees. But it would certainly be nice if these CEOs didn’t “aggressively antagonize the very Americans [they have] long relied on to protect [them] from government control.”

After being canceled, threatened, and shamed, it’s no wonder the majority of Republicans are disgusted at the betrayal of a business community it has historically championed.

In its latest survey, the GOP’s satisfaction with the “size and influence of major corporations” took a nosedive, plummeting a whopping 26 points from 2020 to a new record low: 31%. The relationship between the two longtime allies has soured—and fast.

Justin Danhof, general counsel for the National Center for Public Policy and Research, has been tracking this political drift for the last 10 years, and his only surprise is that it took this long for conservatives to wake up and realize that corporate America is in the tank for the political left.

“When it comes to cultural conservatives, religious conservatives, corporations are on the opposite side of every issue that you hold dear,” he warned on “Washington Watch.” “Many of them fund Planned Parenthood. Many of them oppose your religious freedom, and not just vocally, but in the courts legally fighting against [it].”

Most Americans had no idea how bad it was until last year when Black Lives Matter was burning our cities to the ground, and how did Amazon and Pepsi respond? By sending the organization huge checks. But it wasn’t just the money that bothered conservatives, it was the moralizing.

“That’s what a lot of Americans found so unpalatable—that … these godless, soulless corporations like Disney and Apple are trying to dictate morality here in the United States by saying that this is a white supremacist nation, that our institutions are founded on white supremacy, that we all must bend our knees to Black Lives Matter,” Danhof says.

Then, in the same breath, these same CEOs turn around and do business with communist China. Suddenly, they don’t care about racial justice. They don’t mind that slave laborers from nearby concentration camps are stitching together their Nikes. It’s a culture of corruption, Danhof shook his head, and it’s oozing hypocrisy.

If there is good news, Danhof agrees, it’s that consumers are finally seeing corporate America for what it is. And if their resentment continues to grow, it could signal a major shift in the political landscape.

Remember: conservatives and the Republican Party have long been the most reliable advocates of business. Now, with the Chamber of Commerce outing itself as a satellite office of the Democratic Party, a dramatic sea change could be underway.

Look what the chamber is doing to Republican lawmakers who challenged the election outcomes. “There are some members that by their actions will have forfeited the support of the U.S. Chamber of Commerce. Period, full stop,” the chief policy officer said in a press conference.

Even pro sports has been hijacked liberal companies that are just as woke and left-of-center as the rest of the mob. That’s not lost on the conservative voter.

So what can the average American do? It’s one thing to be upset, but how do we translate that into action? Danhof used the Bank of America as an example.

After the company started turning over the private information of its clients to the federal authorities after Jan. 6, he contacted it and demanded to know if it did the same thing to the rioters in Minneapolis and Portland.

“But how many other people have actually contacted the bank? Have you contacted your regional manager of the Bank of America affiliate where you live? Have you reached investor relations? The website’s right there. Email, call, hound these companies down. Engage. Engage is the key word … ”

If you’re outraged by a company’s political decisions, let them know it. It doesn’t do any good to sit on your hands and complain about it. If you own stock, that’s another major avenue to making your voice heard.

Every year, Danhof pointed out:

There are shareholder votes at every publicly traded company. And board members are a key aspect of this. Every board member is up for a vote each year at the annual shareholder meeting. Al Gore is a board member of Apple. I don’t know how many folks know that—but every year, he receives 99% of the vote to remain on Apple’s board. Do you think Apple’s shareholders are 99% liberal? I highly doubt that. But what’s happening is the conservatives are not engaging their franchise when it comes to these proxy votes.

If they did, he said, they could make a difference.

The main thing is not to be silent. Don’t get angry and walk away. Say something. If we want to protect the values we care about, we have to give voice to them. How do we expect corporate America to get the message if we aren’t sending one?

It’s time to stop waiting for someone else to stand up and speak out. Do your part.