‘Completely Over Moon’: Here’s How Planned Parenthood Hopes to Work With Biden Administration 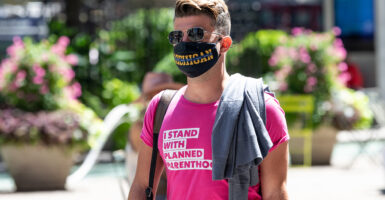 A man wearing a "I Stand With Planned Parenthood" T-shirt walks near Herald Square as the city continues Phase 4 of reopening following restrictions imposed to slow the spread of the coronavirus Aug. 20, 2020, in New York City. (Photo: Alexi Rosenfeld/Getty Images)

“We are engaging in the policy side, on the education side, on messaging, and personnel—all of the ways that we think can be good policymaking but also support the use of the bully pulpit that the White House carries,” she told the publication.

Planned Parenthood wishes to see Roe v. Wade codified into law before the Supreme Court gets a chance to decide on the controversial ruling, Insider reported. With the court’s new 6-3 conservative majority, there is a chance abortion would become illegal in some states if Roe were struck down.

Today, we celebrate these initial steps on the path towards reclaiming full ownership over our bodies, our health, and our futures. We’re grateful @POTUS & @VP have begun to right the wrongs of the last four years — but this is only the beginning. #ReproBlueprint #BuildBackBetter https://t.co/7ULDo6OXam

The United States Supreme Court reinstated a requirement in early January that women seeking to obtain abortion pills must pick up the pills in person from a hospital or medical office rather than receiving them by mail.

McGill Johnson also said Planned Parenthood hopes to see increased funding for Title X family planning programs, calling on Biden to focus on “modernizing” the program, “making sure that it’s inclusive of everyone, of all races and genders,” according to Insider.

“What we’re excited about potentially seeing in the executive action today is that opportunity to build back, to modernize, to really think about all of the ways in which we can take a 50-year-old program and rethink it and reimagine it for the future,” she said.

Biden ordered the Department of Health and Human Services to conduct a review of the Title X family planning regulations last week.

The Department of Health and Human Services alerted clinics in June 2019 that it would enforce the Trump administration’s ban, and Planned Parenthood withdrew from the Title X federal family planning program in August 2019 rather than comply with this decision, thereby forgoing about $60 million a year.

The Senate confirmation for Biden’s HHS pick, Xavier Beccera, has not been scheduled yet, Insider reported, further extending the lengthy timeline needed to change Trump’s Title X regulations. McGill Johnson told Insider she plans to meet with Becerra when he is sworn in.

Becerra already has a reputation for being strongly pro-abortion, according to Insider: He formerly defended a California state law requiring pro-life pregnancy centers to post signs telling patients how they could get state-funded abortions. The Supreme Court struck down this law in 2018 for violating free speech.

“She has really demonstrated her facility of understanding our issues but also the intersection of sexual and reproductive health care with issues of race, with issues of the economy, with issues of democracy and our American values,” the Planned Parenthood president said.

“I’m completely over the moon and so excited to support her leadership and support their vision for how we transform health care, as well as sexual reproductive health care.”