Amazon Doubles Down on Excluding Some Conservative Nonprofits From Customer Donations 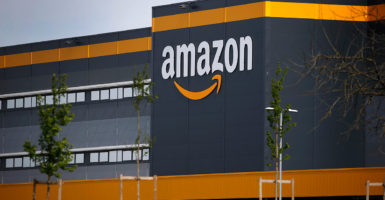 While Amazon customers can use the AmazonSmile program to donate a portion of each purchase to organizations, Amazon has decided to single out a few well-known conservative organizations from receiving part of the tens of millions of dollars the program raises each year from customers. (Photo: Chesnot/Getty Images)

In yet another slap in the face from far-left tech giants to conservatives, Amazon.com recently doubled down on its policy that prohibits customers from donating proceeds from their purchases to well-established conservative nonprofits like the Family Research Council and the Alliance Defending Freedom.

That’s because the company uses the radical, left-wing Southern Poverty Law Center as the standard-bearer to decide which nonprofits customers are allowed to direct their contributions to.

The SPLC has labeled some of the mainstream conservative organizations it disagrees with as “hate groups” and publishes their names in a directory alongside real hate groups like the Ku Klux Klan and neo-Nazis. Amazon won’t allow any group that’s on the SPLC’s “hate list” to participate in AmazonSmile.

The SPLC itself is a completely discredited organization. It bills itself as being on the front lines in the fight against racial inequality and injustice, yet last year its own staffers accused its leadership of years of racial and gender discrimination and of widespread sexual harassment.

Whistleblowers said that the organization had a “systemic culture of racism and sexism within its workplace.” As a result, its co-founder and president were both forced out.

With all this baggage and the SPLC’s known bias against conservatives, one has to wonder why Amazon is using the center to determine which nonprofits are acceptable and which are not.

Yet, recently, at the urging of Amazon’s board of directors, shareholders defeated a resolution that would have ended the use of the SPLC’s defamatory list.

That means long-established, venerable organizations like the Family Research Council continue to be excluded from receiving contributions because the SPLC considers an organization that adheres to traditional Christian teachings about marriage a hate group.

Alliance Defending Freedom, a respected organization of Christian lawyers dedicated to defending religious liberty and free speech rights, was also designated an anti-LGBT hate group because of its defense of traditional marriage in the courts.

The SPLC also considers groups like the Center for Immigration Studies that advocate stricter border enforcement as anti-immigrant hate groups.

The people at the SPLC certainly have a right to disagree with these groups’ policy positions; but it’s unconscionable that they would label decent people as hateful and consider them on equal footing with neo-Nazis and the Klan.

It’s also unconscionable that Amazon would legitimize the SPLC’s list. In doing so, Amazon is telling millions of its customers who share the same traditional Christian or conservative beliefs that they are hateful, too.

A piece of free advice for Amazon’s board of directors: I’ve served on several corporate boards during my career, and it’s just bad business to alienate upwards of half of your customers.

When Amazon’s board recommended that shareholders reject the resolution, it said, “The policies and procedures we have in place for our employees, sellers, and customers are intended to foster diversity and inclusion and promote respect for all people.”

While Amazon is within its rights as a private company to conduct its business the way it wants, consumers also have a right to complain to Amazon and to ultimately decide not to do business with the retailer if their complaints aren’t taken seriously.

In the wake of COVID-19, there are plenty of local businesses that need our support to help bring the U.S. economy back. Perhaps that fact, combined with Amazon’s refusal to change its ways, will provide the impetus for people to shop locally more often.

Local business owners may have their own political opinions, but most are smart enough not to insult half of their customers by injecting those opinions into the shopping experience.