After COVID-19, Only US Can Lead Way on Economic Recovery 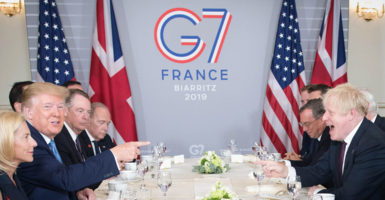 The Trump administration must build consensus for a post-COVID-19 economic recovery partnership for the free world. Pictured: President Donald Trump and British Prime Minister Boris Johnson share a laugh during a bilateral meeting at the G-7 summit on Aug. 25, 2019, in Biarritz, France. (Photo: Stefan Rousseau/Pool/Getty Images)

The world never stops turning. Troubled times at home or not, the need for American leadership never lessens.

Although the meeting of the Group of Seven leaders has been postponed, Washington should get the get-together back on track. The administration must build consensus for a free world post-COVID-19 economic recovery partnership and cement the deal at an assembly of the right leaders.

Despite our many difference, free nations believe in freely elected governments, human rights, and the free enterprise system.

By contrast, authoritarian regimes such as China, Russia, and Iran do not. They see our liberty as a threat to the expansion of their power. If we do not stand up for the free world, they will go out of their way to erode the foundations of liberty.

America’s role is crucial. America is a global power with global interests and responsibilities. Those tasks help make and keep us great.

No country benefits more than the U.S. from the freedom of the commons—such as the freedom to sail the seas, use the skies, and enter outer space. No country profits more from conducting trade and business among free like-minded nations. Those are things worth safeguarding.

Job one has to be to get the economies of the free world up and running so we can we ensure the freedom, prosperity, and security of free peoples.

The administration already has several initiatives on the table that could be integrated into a proactive economic partnership plan for the G-7 summit. That partnership would not be about traditional foreign aid or assistance, but instead be built around efforts to invest, engage, and enable partnerships to jump-start our economies.

A good example, for instance, is the recent British endorsement of a proposal for a “club of democracies” developing free market alternatives to the Chinese company Huawei’s effort in dominating global 5G telecommunications networks.

The U.S. could use the format of a G-7 “plus,” including other key democracies, such as Australia and India, to knit together regional plans for strategically key areas into a global initiative.

Particularly crucial for the U.S. are plans for our partnership with Canada and Mexico; the transatlantic community; the Indo-Pacific; the Middle East and North Africa; and sub-Saharan Africa.

President Donald Trump has already suggested the idea of a G-7-plus assembly of world leaders. He’s right to press for an in-person leader meeting sooner rather later.

He would be wise, however, to limit participation to the world’s leading democracies. Neither China nor Russia share the U.S. commitment to see free markets flourish or strong resilient democracies in places such as the Western Hemisphere, Europe, or Asia.

Other free world leaders need to put their concerns and reservations aside, bring their constructive ideas to the table, and commit to building a common recovery agenda.

The U.S. and its free world partners have the chance to empower the free world not only to overcome the challenges of COVID-19, but also to make our nations more resilient for the multitude of challenges of the 21st century.