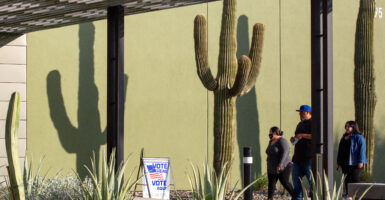 The Biden administration in effect maintains the same position, for now, as the Trump administration regarding a major election integrity case before the Supreme Court. Pictured: Voters arrive Nov. 3 at their polling place at Eloy City Hall in Eloy, Arizona. (Photo: Courtney Pedroza/Getty Images)

On the cusp of Supreme Court arguments about Arizona’s ban on the controversial practice of ballot harvesting, President Joe Biden’s Justice Department pulled a surprise maneuver—inaction.

In a carefully worded letter to the Supreme Court, the Justice Department  said it “does not disagree with the conclusion” of the Trump administration’s amicus brief defending Arizona’s laws to prohibit ballot harvesting and require residents to vote at their assigned precincts.

The Justice Department’s letter this week also said it “does not seek to make a further substantive submission in these cases.”

Arizona first banned ballot harvesting in 2016, prohibiting third parties such as political operatives and activists from having access to large amounts of absentee ballots for the purpose of collecting and delivering votes to local election offices.

The Arizona case is far-reaching because 19 other states have similar bans on ballot harvesting, while 27 states and the District of Columbia specifically allow the practice.

Most states require citizens to vote at their assigned precinct, a requirement that Arizona has had in some form since the 1970s.

The Justice Department’s letter to the Supreme Court, dated Tuesday, indicates a likelihood that the Biden administration will alter the Trump administration’s interpretation of the Voting Rights Act sometime in the future, but not in this case.

That stand is going to leave the Democratic National Committee with “a lot of explaining to do,” Arizona’s attorney general said.

“The bottom line is that based on the DOJ statement, we should win. They left it vague, but they didn’t challenge it,” Brnovich said of Arizona law. “That the Biden administration does not have any substantive submissions to the case shows the strength of our argument.”

Arizona’s ballot-harvesting ban made it a felony punishable by up to two years in prison and a $150,000 fine for someone other than a person’s family members, caregivers, mail carriers, and election officials to collect ballots.

The Democratic National Commitee contends that the Arizona laws violate Section 2 of the Voting Rights Act, a provision that prohibits laws that result in racial discrimination in voting.

The DNC claims the ban on ballot harvesting was intentional discrimination by the state Legislature against minority voters, and would be a violation of both the Voting Rights Act and the 15th Amendment to the Constitution.

The Justice Department letter, signed by Deputy Solicitor General Edwin Kneedler and addressed to Supreme Court Clerk Scott Harris, notes that the Trump administration filed an amicus brief “taking the position that neither Arizona measure violates the results test under Section 2 of the Voting Rights Act.”

The Trump administration also argued that the 9th U.S. Circuit Court of Appeals erred in overturning a lower court’s ruling.

“Following the change in administration, the Department of Justice has taken a reexamination of the issues in these cases and a reconsideration of the framework for reviewing vote-denial claims under the results test of Section 2 as articulated by the United States in its previously filed brief,” the DOJ letter says, adding:

The department now has concluded that although it does not disagree with the conclusion in that brief that neither Arizona measure violates Section 2’s results test, the department doesn’t adhere to the framework for the application of Section 2 in vote-denial cases set forth in the brief.

In light of the approaching oral argument, however, the United States does not seek to make a further substantive submission in these cases. Instead we have concluded that the most appropriate course under the circumstances is to notify the court that the previously filed brief does not represent the current views of the United States.

A Justice Department spokesperson declined to comment to The Daily Signal beyond the content of the letter.

The DNC did not immediately respond to a request for comment, but previously has called the Arizona laws “voter suppression.”

In a preliminary ruling last year, the Supreme Court issued an injunction after the 9th Circuit struck down the laws to allow them to remain in place pending a ruling by the high court. This injunction allowed Arizona’s law to stay in place during the 2020 election.

Perez and Fairchild called the Arizona laws “a discriminatory attack on voters of color, including Native American, Latinx, and African American communities” and added:

As Democrats, our goal is to engage every eligible American voter as an active participant in our democracy by making it easier for people to vote, not harder. That means continuing to stand up against voter suppression tactics to create free, fair, and accessible elections that protect the fundamental right to vote, and we are committed to this fight.

In 2005, the bipartisan Commission on Federal Election Reform chaired by former President Jimmy Carter and former Secretary of State James Baker recommended that states “prohibit a person from handling absentee ballots other than the voter, an acknowledged family member, the U.S. Postal Service or other legitimate shipper, or election officials.”

The bulk of legal findings on voter fraud cases have been related to mail-in or absentee ballots.

“Allowing the DNC argument to prevail would strike down any commonsense election integrity laws,” Brnovich said. “Any change in election law will affect voters. The question is, does it apply equally and does everyone have the same opportunity to vote? Their argument is the statistical impact on different voting groups.”