US Election Fraud Is Real—and Its Impact Is Being Ignored 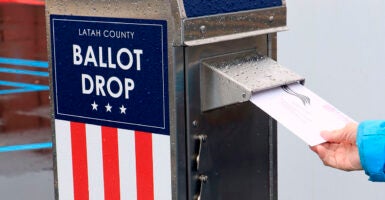 Mark Harris was riding high on Election Day in 2018. The Republican candidate for North Carolina’s 9th Congressional District had beaten his Democratic opponent in a very close race. Next stop: the U.S. House of Representatives.

Or so it seemed. Harris had won by 905 votes, a margin of only 0.3% of all ballots cast. The state’s Board of Elections refused to certify the results, though, when evidence surfaced of “concerted fraudulent activities related to absentee by-mail ballots,” including illegal vote harvesting by a political consultant and his associates.

The board’s investigation turned up so many cases of fraudulent activity, including forged signatures and widespread ballot harvesting, that a new election was ordered in the congressional race as well as two local races. A new candidate, Dan Bishop, took Harris’ place and went on to win the seat in a special election last year.

Not all cases of election fraud are this far-reaching, of course. Many are quite small, involving a relative handful of votes. But they are not nearly as rare as many people would like to think.

The fact is, election fraud is real, and as many of the examples in The Heritage Foundation’s Election Fraud Database show, it can change the outcome of an election.

And yet many in the media would rather look the other way. Worse, some try to dismiss or explain away evidence that doesn’t fit the pre-approved “move along, nothing to see here” narrative. They falsely insist that there are no vulnerabilities in the electoral process.

A reporting team from USA Today, PBS “Frontline,” and Columbia Journalism Investigations is the latest culprit. No fewer than 14 reporters contributed to a lengthy story that attempts to downplay the actions of the individuals who have been found guilty of various election offenses.

For example, they attempt to diminish the culpability of the actions of Gary and Leila Blake, who wrongly voted by absentee ballot from an address and town at which they no longer resided.

Like many of the cases in the Heritage database, the Blakes were originally charged with a felony for their actions, but ultimately entered a guilty plea—an admission of guilt—to a reduced charge so their voting rights would not be terminated within the entire state of Wyoming.

Each and every one of the cases in the database represents an instance in which a public official, usually a prosecutor, thought it serious enough to act upon it. And each and every one ended in a finding that the individual had engaged in wrongdoing in connection with an election—or that the results of an election were sufficiently in question and had to be overturned.

Moreover, the article implies the case of Gary and Leila Blake is a typical entry in the database, and ignores other more serious cases of absentee ballot fraud. They claim that innocent widows and widowers are merely carrying out the “dying wish” of their loved ones when they cast ballots in their name, even though everybody knows that only the living have a right to vote in elections.

They quote from a well-known (and very partisan) liberal law professor who says that individual acts of election fraud are “not calculated to change election outcomes.” Of course they are. Every person who engages in election fraud is hoping to affect the outcome.

The reporters assert that there is not a single example of absentee fraud that has affected the outcome of an election. But there are several examples in our database (such as the North Carolina one cited earlier) of new elections being ordered because absentee ballot fraud cast serious doubt on the legitimacy of the original results.

The USA Today and PBS story criticizes the inclusion in the database of Alabama’s 2016 Wetumpka County Council’s District 2 election, which was decided by three votes in favor of Percy Gill. It was overturned by a judge when at least eight absentee ballots were discovered in which the signatures had been forged or not notarized or witnessed as required by state law.

Another case in the database from Kaufman County, Texas, involved an election for the City Council that was overturned and a new election ordered by a Democrat judge due to vote harvesting and absentee ballot fraud.

In the 2018 mayor race in Mission, Texas, a judge overturned the initial results after hearing two weeks of testimony about bribery and manipulated absentee ballots by the campaign of incumbent Armando O’Caña. The judge found that over 158 votes were cast illegally.

A recent case study we did outlines four elections in four different states that were overturned due to absentee ballot fraud involving hundreds and, in one case, thousands of ballots.

Yet the reporters for USA Today, PBS “Frontline,” and Columbia Journalism Investigations skip over these almost entirely in their article, stopping only to claim that the 1997 Miami mayor race that was overturned due to fraud “quickly collapsed” due to the Miami Herald’s investigation—as if that somehow minimizes the fact that the fraud took place.

Indeed, the scheme was uncovered precisely because the newspaper assigned a large slew of reporters to investigate the election and uncover the wrongdoing. Too many other media outlets are apparently content to try and debunk such overwhelming evidence, not investigate it.

Further, while USA Today and PBS do mention the overturning of the 9th Congressional District race in North Carolina in 2018, they do not give any details about the case and the hundreds of absentee ballots that were tampered with. Those details, of course, might upset their “nothing to see here” narrative.

Other entries in the database demonstrate that absentee ballot fraud is often calculated and organized, not, as the authors imply, simple mistakes made by innocent people who were duped by the legal system.

Take the case of Bret Warren in Florida, who pleaded no contest to two felony voter fraud charges. His scheme was uncovered after five residents in a neighboring town did not receive their absentee ballots for the 2016 election, but were surprised to discover that they had been filled out, signed, and returned. Warren’s fingerprints were found on each of those ballots.

Absentee ballot fraud often targets some of the most vulnerable in our society. Our database has numerous instances of schemes that specifically victimize the elderly, disabled, and other marginalized groups in society.

Take, for instance, former Connecticut state Rep. Barnaby Horton, who pleaded guilty to ballot fraud after he was caught inducing elderly residents to cast absentee ballots for him.

The State Election Commission imposed a fine of $10,000, one of the largest ever issued, after determining that Horton had gone from room to room in a housing facility for low-income, elderly people passing out absentee ballots and telling those residents to vote for him.

Or take another case out of Florida. Deisy Cabrera pleaded guilty for her involvement as an absentee “ballot broker” in a large absentee voter fraud scheme.

Cabrera, who was paid by more than a half-dozen candidates for judicial office, had several absentee ballots in her possession at the time of her arrest and kept a notebook with over 500 names and addresses of voters who she targeted. These mostly elderly Hispanics in Hialeah were labeled as “Deisy’s Voters” and included information about whether the voter was illiterate, blind, deaf, or had Alzheimer’s.

One poignant story uncovered by the Miami Herald demonstrates how elderly and disabled voters can easily be manipulated and pressured in their homes, hospitals, or nursing homes where there are no election officers or poll watchers to supervise or observe the voting process.

“I was taken advantage of,” Ada Perez told reporters. A campaign operative tracked down Perez, 70, at the hospital where she was recovering from a severe stroke. She described how the operative “badgered her to vote for Suarez, then finally took her ballot and punched it for her.”

Her “eyes welling with tears,” Perez said her “vote was stolen … . They know our eyesight is not good, and we are not well. What kind of person would take advantage of the elderly?”

In New Jersey, John Fernandez, who worked for the Essex County of Department of Economic Development, was convicted of election fraud, absentee ballot fraud, and forgery.

Fernandez was involved in a large scheme to help a Democratic state Senate candidate win. Fernandez obtained absentee ballots and filled them out on behalf of voters who never received or filled out their ballots. These cases were all ignored by USA Today and PBS.

As our database makes clear, there are many ways to tamper with elections. Take the five local officials, including an alderman and fire chief, who were convicted for their efforts to rig the town’s 2017 municipal election in Canton, Mississippi, in that scheme that involved everything from voter registration fraud to intimidating and bribing witnesses.

Regarding the razor-thin margins of some of our elections, the Ohio Secretary of State Office reported that between 2013 and 2017, 56 elections resulted in a tie vote and 86 were decided by only one vote. In close elections, where every vote counts, a handful of fraudulent votes can alter the outcome and thwart the will of the people.

Some of the claims made by USA Today and PBS are just plain senseless. For example, they criticize the database for using the date of conviction when listing a summary of a particular case because the conviction “may come years after the fraud,” as if that is somehow misleading.

USA Today and PBS also criticize the inclusion of cases in which “no fraudulent votes were involved.” All that means is that the fraud, such as voter registration fraud, may have been caught before a fraudulent vote was cast. That is like claiming that a bank robber who was apprehended while still in the bank isn’t really guilty, and we shouldn’t worry about those types of attempted robberies.

Interestingly enough, USA Today and PBS have not spent any time or resources investigating, or reporting on, the findings of a recent report by the Public Interest Legal Foundation that exposed thousands of individuals who may have illegally voted more than once in the 2016 and 2018 elections. Or a 2017 report by the Government Accountability Institute that reported on approximately 8,500 individuals who may have voted twice in the 2016 election.

It is important to remember that every fraudulent vote that is cast invalidates the vote of an eligible voter. We have many close elections in this country, and plenty of people stand to gain financially or through increased access to powerful figures who have incentives to cheat, as well as some individuals who just want to provide a boost to their preferred candidate.

Americans deserve to have an electoral process that they can trust and that protects their most sacred right, and they have the right to know when the integrity of that process is imperiled.