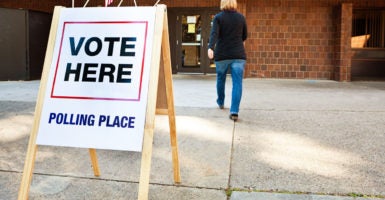 Courtney Rainey’s scheme involved bribing voters with gift cards and cash to win an election. When one of the people Rainey had bribed told authorities about the plot, Rainey attempted to intimidate the voter into changing her initial statement to officials. (Photo: Getty Images)

For the residents of Canton, Mississippi, faith in their elected officials must be at an all-time low.

The city has been facing seemingly endless election scandals in the past couple of years. Five local officials—including an alderman, the fire chief, and the city clerk—have been convicted of a variety of crimes stemming from their efforts to rig a 2017 municipal election, and can never seek public office again.

It’s disturbing that so many elected officials, entrusted to represent the people and improve the community, were instead able to corrupt the electoral system in the name of power and personal gain.

And, as Canton’s residents are discovering, the worst of the bunch might just be Courtney Rainey.

Courtney Rainey—Canton’s director of human and cultural needs, school board member, and (ironically) judicial candidate—was convicted and sentenced Sept. 23 to 15 years in prison on charges of witness intimidation after she tried to stymie the criminal investigation into her earlier efforts at voter fraud.

While many were given the opportunity to enter pretrial diversion programs or step down from their offices, Rainey was not given the same leniency in her sentence—and for good reason.

Rainey’s scheme involved bribing voters with gift cards and cash to win an election. When one of the people Rainey had bribed told authorities about the plot, Rainey attempted to intimidate the voter into changing her initial statement to officials.

Rainey was insistent, too. She showed up at the voter’s job and home, not once, but twice.

Some may argue that a 15-year sentence is overkill for the crime she committed. It’s true that Rainey was not the only Canton public official to try to sway the results of an election, and her sentence is certainly an outlier among the other cases.

However, during sentencing, Judge Dewey Arthur gave good reason for the stiff punishment: “All the other people charged accepted responsibility.” Rainey, by contrast, tried to cover up her wrongdoing by threatening witnesses.

Even now, she continues to fight charges against her, and faces another seven criminal voter fraud trials set to begin soon.

Further, not only has Rainey been remorseless about her efforts to steal an election, the judge pointed out that she “doubled down and sought more power and more influence after these indictments came down.”

People can easily enough get swept up in their own ambition, and Rainey is hardly the first public official to be swayed to commit fraud by the siren call of power.

Indeed, The Heritage Foundation’s Election Fraud Database records 1,217 documented instances of voter fraud, some in nearly every state. These cases are just a sampling of voter fraud in America, but the database’s entries contain many examples shockingly similar to Rainey’s.

The bottom line: So long as elections are the path to political power, unscrupulous activists and officials will seek out and exploit vulnerabilities to ensure their careers or their political causes aren’t left up to the whims of voters.

When that fraud is ignored or tolerated, it metastasizes. Canton, about 25 miles northeast of the state capital, Jackson, is proof: This one case has brought down five current or former public officials who worked to thwart the will of voters for their own purposes.

Democracy only works when voters can trust that the results of elections are accurate and valid.  When anyone corrupts that process through fraud, the taint lingers and can do grave damage to public trust in elections.

The judge’s decision to give Rainey a tough sentence emphasizes that. Compromising fair elections undermines—and sometimes entirely strips away—the most important voice that the people have. Elections, after all, are supposed to be about the voters—not the candidates—deciding who will best represent the needs of their community.

The people of Canton deserve fair elections. When attempts are made to compromise those elections, those responsible should face serious consequences for their actions.

That is exactly what is happening to the city officials of Canton who, like Rainey, betrayed the city’s trust.

The fact that most acknowledged their guilt does not excuse their misconduct, but there is a notable difference between taking responsibility for one’s unethical actions and attempting to cover them up.

Denying an abuse of power when caught red-handed is a level of audacity that society cannot—and should not—tolerate, particularly when it undermines the core of our democracy.