We Can’t Just Focus on Public Health. Fiscal Health Is Also Vital to Our Nation’s Future. 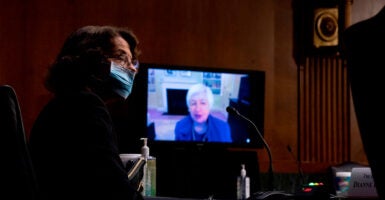 Uncle Sam hit a budget deficit of $163 billion in January, a record high for the month and a $130 billion hike from the deficit in the same month last year. This does not bear well for America’s fiscal health.

Not only that, but for the first four months of the 2021 fiscal year, the budget shortfall rose by almost 90% to $736 billion, with the deficit, revenues, and spending all reaching year-to-date record highs.

Rising deficits and mounting public debt—particularly debt incurred to fund higher government consumption or transfer payments—is likely to undercut overall productivity growth and ultimately lead to economic sluggishness rather than growth. Think of it as the “fiscal flu.”

There is increasing evidence, from the Bank for International Settlements, the [Organization for Economic Cooperation and Development], and Wall Street, that four straight decades of growing government intervention in the economy have led to slowing productivity growth—shrinking the overall pie—and rising wealth inequality …

[The Biden] administration argues that low rates liberate governments to borrow and spend in unlimited amounts for the foreseeable future. But this claim gets the story backward. Instead of a path to freedom, low rates are a trap. They encourage more borrowing and rising debt, which drags productivity lower and slows growth. That makes the economy financially fragile, forcing central banks to keep rates low.

Given today’s very high levels of debt, only a small increase in interest rates would make the debt burden unsustainable.

The Biden administration and Democrats in Congress argue that massive new spending is necessary to counteract the negative impacts of the coronavirus pandemic. But Congress has already appropriated more than $4 trillion in response to the pandemic, much of which is still available or in the process of being dispersed.

As my colleague at The Heritage Foundation David Ditch recently pointed out, “Even after the pandemic is over and the economy returns to normal, we will face serious problems as a result of the federal government’s broken finances.”

It is notable that in a recent Washington Post op-ed, Harvard economist Lawrence Summers, who was treasury secretary in the Clinton administration and former President Barack Obama’s top economic adviser, warned that President Joe Biden’s plan was overly “excessive.” He further raised key questions that should be dealt with properly for our nation’s economic health:

[M]uch of the policy discussion has not fully reckoned with the magnitude of what is being debated. Is the thinking that deficits can prudently be expanded longer and further? Or that new revenue will be raised? If so, will this be politically feasible?

As its final details are crafted, it will be essential to carefully consider how the choices we make now may constrain what we are able to achieve in the future.

As documented in The Heritage Foundation’s Index of Economic Freedom, there is ample evidence from around the world that widening deficits and a growing debt burden run a grave risk of eroding a country’s economic vitality.

Unfortunately, on the current spending trajectory, the U.S. economy is not likely to be an exception to that.