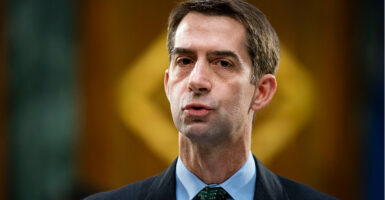 Two Republican senators on Tuesday blasted President Joe Biden for withdrawing a proposed rule that would require U.S. schools to disclose their partnerships with Confucius Institutes, which some U.S. officials and lawmakers have alleged serve as front groups for the Chinese Communist Party.

Arkansas Sen. Tom Cotton and Florida Sen. Marco Rubio, both known as China hawks, criticized Biden on Tuesday following reports that the administration had withdrawn the rule, which the Trump administration proposed to the Department of Homeland Security and Immigration and Customs Enforcement on Dec. 31.

A spokesperson for ICE confirmed to The Daily Caller News Foundation that the rule had been withdrawn from consideration. The spokesperson did not elaborate on the decision, but Biden has pledged to roll back many of former President Donald Trump’s immigration policies.

“Confucius Institutes are front groups for the Chinese Communist Party on American campuses,” Cotton said in a statement.

He said the federal government should shut down the “regime-run institutes” or, “at a minimum, require colleges to disclose their secret agreements with them.”

“Instead, the Biden administration is allowing a foreign influence operation to continue in the shadows,”

“But now Biden quietly withdrawn rule proposed by Trump admin to require schools & universities to disclose their partnerships with these agents of Chinese govt [sic] influence,” wrote Rubio, who serves as vice chairman of the Senate Intelligence Committee.

In August, the Trump administration labeled the Confucius Institute U.S. Center a “foreign mission” of China, the same designation used for foreign consulates and embassies.

Then-Secretary of State Mike Pompeo asserted that the Confucius Institute was “an entity controlled by the PRC that advances Beijing’s global propaganda and malign influence campaign on U.S. campuses and K-12 classrooms.”

The Confucius Institute U.S. Center did not respond to a request for comment.