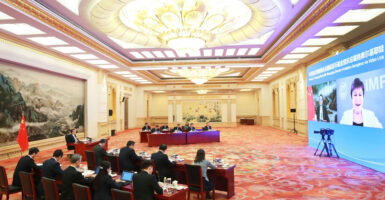 Last year, The Heritage Foundation analyzed the risk to American taxpayers from a plan pushed by progressives and the international left to massively increase the quantity of the International Monetary Fund’s special drawing rights, or SDRs—a type of international reserve currency.

Under the Biden administration, those fears may soon be realized. And which country would be the chief beneficiary of U.S. taxpayers’ coerced trillion-dollar largesse? The People’s Republic of China.

The SDR expansion proposal has been circulating for years, lately under the pretext of aiding developing countries affected by the pandemic. In its current version, the proposal would increase the amount of SDRs at the IMF to as much as 2 trillion SDRs (about $2.8 trillion).

Promoted by left-leaning politicians and think tanks, the foreign aid community, George Soros, and the Chinese Communist Party, among others, SDR expansion was discussed at the IMF’s spring 2020 meeting.

If approved, the amount of SDRs available to countries would increase tenfold over the current level of SDR 204 billion (about $288 billion) in what would amount to money printing on a global scale.

U.S. allocations of SDRs (currently about $55 billion) would also rise exponentially, and the United States Treasury, as the IMF’s principal “designated participant,” could be forced to fund additional foreign exchange transactions of $1.5 trillion.

The annual cost to American taxpayers to fund just the associated interest rate and credit-risk subsidies of that massive additional amount could be tens of billions.

The fight between liberals and conservatives over the appropriate role of the IMF goes back to its creation at the 1944 Bretton Woods Conference. The conservative U.S. position then was that the IMF’s only mission was to manage exchange rate fluctuations.

The liberal view from Europe, pushed by John Maynard Keynes and others, envisioned a more expansive financial organization wherein the IMF would function as a global central bank lender of last resort. Many of those ideas were incorporated into what became the World Bank.

Meanwhile, the gold standard also broke down. To maintain it, the U.S. had had to run annual current account deficits so that dollars would be available to other countries to settle their international transactions. To address that problem, the IMF created special drawing rights in 1969, creating a synthetic reserve asset to supplement the supply of gold—basically an accounting trick.

When the U.S. abandoned the gold standard in 1971, the rationale for SDRs was eliminated. Yet they remained on the books at the IMF while its international civil servants invented new reasons to keep them. The main reason they came up with was to use them as a back door to permanent increases in developing countries’ quotas, at the expense of the U.S.

Expanding SDRs would open the IMF’s front door to many more morally hazardous bailouts—even to oppressive and/or corrupt regimes—without having first demanded sufficient recipient-country accountability for any prior bailouts. The biggest losers from these cycles of financial crises and IMF bailouts are the poor.

SDR expansion is also being pushed by General Secretary Xi Jinping as part of his far-reaching strategy to weaken America’s global hegemony, including, perhaps, by undermining the status of the U.S. dollar as the world’s most widely held reserve currency, possibly with the eventual goal of having SDRs replace the dollar.

A Feb. 3 op-ed in the The Wall Street Journal by Rep. French Hill, R-Ark., has brought renewed focus on the SDR threat. In it, Hill notes the reluctance of Treasury Secretary Janet Yellen to take a firm position on the issue at her confirmation hearing (although, as a former Federal Reserve chair, she does see the many downside risks of the plan).

He also raised another likely scenario: that SDRs would be used to repay debts to China, arguing that as “the foremost creditor to the developing world, Beijing has fought multilateral agreements to suspend poor nations’ debt repayments during the pandemic” while resisting “pressure from the U.S. and allies for greater transparency on its predatory lending terms.”

With a huge infusion of cash from American taxpayers, those developing country debtors could repay their Chinese loans with no accompanying IMF effort to force Beijing to restructure or forgive them. The potential SDR windfall for China could run into the hundreds of billions—and Beijing’s debt-trap diplomacy could continue apace.

The IMF can serve as a valuable global backstop and has helped the American and world economies during past liquidity crises. However, expanding the IMF’s morally hazardous, unconditional SDRs would be a back door to a huge increase in U.S. foreign aid beyond the control of American taxpayers.