Your Tax Dollars Will Fund the Next Global Bailout 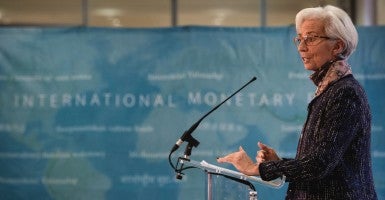 The Financial Times reports that officials “from the International Monetary Fund (IMF) and the World Bank are heading to Azerbaijan to discuss a possible $4 billion emergency loan package in what risks becoming the first of a series of bailouts stemming from” tumbling world oil prices.

Not surprisingly, other corrupt, oil-cursed countries have caught the whiff of “free” money and are getting in line to seek their own IMF bailouts. They include Iraq, Ecuador, and economic basket case Venezuela, which is on the verge of bankruptcy. Bloomberg reports an IMF forecast of inflation hitting 720 percent in Venezuela in 2016. Actually, that’s not inflation—that’s verging on hyperinflation.

Where did all that new IMF cash come from?

From U.S. taxpayers, of course. Well, about 20 percent of it, anyway (about $62 billion, or 40.9 billion “Special Drawing Rights” [SDRs] in IMF-speak), thanks to the little-noted inclusion of an “IMF Reform Package” that was tucked into the gigantic omnibus appropriations bill that Congress passed just before Christmas.

Lending to countries as badly governed as Ecuador and Venezuela could just enable them to go further into debt. That’s known as moral hazard.

Lending to countries as badly governed as Ecuador and Venezuela could just enable them to go further into debt. That’s known as moral hazard.

This is what happened when the IMF bailed out Greece in 2010—without any conditions to force the Greek government to end profligate spending and make other reforms. The IMF itself has conceded “notable failures” in its first Greek bailout. It was the first, by the way, because it led to two more bailouts.

At the end of the day, though, the biggest mistake of countries now seeking bailouts was their failure to take advantage of the boom times to implement policy reforms.

They all score poorly on The Heritage Foundation’s Index of Economic Freedom, and all the IMF lending in the world won’t save them if they won’t save themselves.