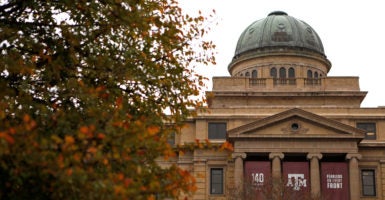 Tensions between the U.S. and China just reached two college campuses in Texas.

On April 9, the Texas A&M University system announced its intention to close two Confucius Institutes located at its College Station and Prairie View campuses, respectively. The Chinese government-funded institutes offer language and cultural programming for students, but a recent letter from Reps. Henry Cuellar, D-Texas, and Michael McCaul, R-Texas, flagged them as “a threat to U.S. national security,” saying they serve “as a platform for China’s intelligence collection and political agenda.”

We have great respect for Congressmen McCaul and Cuellar. I don’t question their judgment, nor their patriotism. In addition, they have access to classified information we do not have. We are terminating the contract as they suggested.

This action follows similar decisions by the University of Chicago and Pennsylvania State University to sever their ties with China. Concerns over the Confucius Institutes, which are located at universities around the world, have been growing in recent years and have come under increased scrutiny from members of Congress, the media, and academic organizations like the American Association of University Professors.

Located primarily in the United States and other Western countries, ostensibly to further Chinese language training and cultural programs, the number of institutes funded and controlled by the Chinese Ministry of Education has mushroomed.

According to a 2017 study by the National Association of Scholars, from their beginning in 2004, the number of Confucius Institutes housed at colleges and universities has grown to well over 1,000 worldwide and 103 in the United States. In addition, over 500 Confucius classrooms are housed at American high schools.

In a hearing before the Senate intelligence committee on Feb. 15, Sen. Marco Rubio, R-Fla., asked FBI Director Christopher Wray what the intelligence community thinks of this Chinese presence on American campuses of higher education.

Wray confirmed that the FBI is monitoring Confucius Institutes around the U.S. and has ongoing investigations of some of them. He said:

I think the level of naiveté on the part of the academic sector about this creates its own issues. They’re exploiting the very open research and development environment that we have, which we all revere, but they’re taking advantage of it. … [The institutes are] complicit in these efforts to covertly influence public opinion and to teach half-truths designed to present Chinese history, government, or official policy in the most favorable light.

American academic deans have no input into Confucius activities and course offerings, and may not even know that a Confucius Institute is landing on their campus. But with China offering grants of about $100,000 to $150,000 to cover annual operating expenses and with all staffing expenses paid for, U.S. colleges and universities have gratefully accepted the offer.

Yet in doing so, they have sacrificed their academic integrity and independence, and potentially created inroads for Beijing to “covertly influence public opinion and to teach half-truths” to our students.