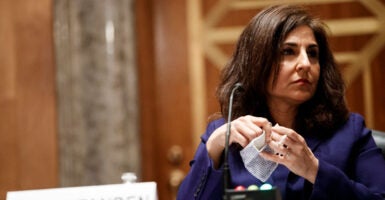 Neera Tanden is President Joe Biden’s nominee for director of the Office of Management and Budget. She is pictured here during a Senate Homeland Security and Governmental Affairs Committee confirmation hearing Feb. 9. (Photo: Ting Shen-Pool/Getty Images)

May Davis, a former White House legal advisor, is a visiting fellow with the Independent Women’s Law Center.

President Joe Biden’s pick for the director of the Office of Management and Budget, Neera Tanden, participated Tuesday in one of her two Senate committee hearings.

If our senators fail to recognize and defend their duty to preserve democratic power for the American people and allow Tanden to hold this position, we can expect her to expand an unconstitutional fourth branch of government—a sprawling conglomeration of bureaucratic departments—run by unaccountable leftists.

The groundwork for this model has already been laid. The Clinton administration ushered in a concerning new normal: The president issues directives to partisan agency heads telling them to create regulatory regimes of his preferred policies.

Former President Bill Clinton issued these orders 100 more times than his predecessor, on issues from labor and environmental controls to education and local policing.

The Biden administration has similarly used its first few weeks to expand the rule of unelected bureaucrats to workplaces, schools, hospitals, homes, and cars. While presidential directives can often be executed lawfully, the gargantuan agencies of Washington are likely to carry these to their leftist extreme, if allowed or encouraged by their leadership.

For this reason, confirming a leader with a sense of constitutional limits within the Office of Management and Budget, which corrals the agencies, is the last hope for Americans who believe there are some places the federal government cannot go.

The threat to our day-to-day life is tangible. Take, for example, the “Modernizing Regulatory Review” memorandum, issued Jan. 20. The memo reversed five executive orders issued by former President Donald Trump, each concerned with fairness and accountability in the regulatory process and lightening the regulatory load on Americans.

Indeed, Trump’s deregulatory policies provided the average American household an extra $3,100 per year, and provided small businesses certainty about how they could comply with the law.

In place of Trump’s executive orders, Biden directs the not-yet-confirmed director of the Office of Management and Budget to “affirmatively promote regulations” that promote a cadre of undefined values such as “equity” and “the interests of future generations” and to figure out how to “play a more proactive role in partnering with agencies to explore, promote, and undertake regulatory initiatives that are likely to yield significant benefits.”

Biden proposes to place this vast and undefined power with Tanden.

Tanden has been widely criticized by her former colleagues as a “very bad leader” of the leftist think tank Center for American Progress and “impossible to trust.” She has had to apologize for numerous scathing tweets disparaging Republicans, and she has deleted more than 1,000 mean tweets since being considered for the role. Even her allies on the left must find it hard to justify her punching a reporter who asked a question she didn’t like (although she said she merely pushed him).

Tanden’s character flaws are ground for concern. But her disregard for the proper role of government, however, should be outright disqualifying. The Biden administration has defended Tanden by citing her “fresh perspective,” saying that she “knows how vital funding for government programs is.”

Biden’s defense of his nominee assumes the best use of the Office of Management and Budget is to expand leftist policies and distribute taxpayer dollars to preferred beneficiaries.

But as I learned while working at the White House all four years of the Trump administration, the real job of the office is to assess actions of executive branch agencies for consistency with the law and the budget as passed by Congress, to shepherd those agencies’ actions through a review process to ensure their regulations serve Americans, and to provide some carry-over knowledge between administrations.

Harmful leftist policies should be left to think tanks like the Center for American Progress—not advanced by the Office of Management and Budget.

What are some of the leftist policies on Tanden’s wish list? The policies that the Center for American Progress advocated under Tanden’s leadership provide some clues. They include:

Tanden does bring a “fresh perspective” to the Office of Management and Budget—the unrelenting expansion of the federal government and the administrative state, and social engineering programs that creep into every aspect of American life.

For democracy to win out, the Senate cannot confirm individuals more committed to partisan politics than to the Constitution and the proper role of agency rule-making in our government. If they are confirmed, the American people will find their remaining tools insufficient to protect their freedoms and the rights guaranteed to them by the Constitution.