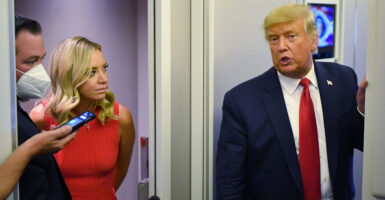 The order is intended to address what Trump administration officials say is a concern about the growth of the federal bureaucracy and about an increasing willingness by Congress to delegate policymaking authority to executive branch agencies.

Because of civil service protections, career federal employees essentially can make and design policy details and rules with little or no public accountability.

“President Trump is delivering on his promise to make Washington accountable again to the citizens it’s meant to serve,” Russ Vought, director of the Office of Management and Budget, told The Daily Signal in a statement. “This much-needed reform will increase accountability in essential policymaking positions within the government.”

The federal government has political appointees who serve at the pleasure of the president or agency head as well as career employees who cannot be removed without a lengthy civil service process.

The goal is to ensure that federal employees responsible for making policy decisions are held accountable, administration officials say.

Accountability is a major concern. The Federal Employee Viewpoint Survey found that only one-third of respondents said proper steps are taken to address poor performers who cannot or will not improve.

Under the executive order, Cabinet secretaries and federal agency chiefs would make a determination which employees have a role in writing policy. The agency heads then would submit the list to the Office of Personnel Management for review.

The reform is reasonable, said Rachel Greszler, a research fellow in economics, budget, and entitlements at The Heritage Foundation.

“This commonsense change to insert some much-needed accountability could significantly improve the effectiveness of the federal government,” Greszler told The Daily Signal, adding:

Imagine if a CEO was prevented from disciplining or dismissing managers who refused to carry out her directives or who took actions to thwart her initiatives. That’s the case right now within the federal government, where it’s extremely difficult—sometimes seemingly impossible—to fire federal employees.

Federal workers who hold critical policy-related positions, with the power to significantly impact Americans’ lives, should not be immune from accountability. This change is long overdue. It will result in better stewardship of taxpayers’ money, and could improve morale as federal workers show high levels of dissatisfaction with a lack of accountability.

The president has sought to tame the bureaucracy since taking office in January 2017. Among the earliest bills he signed was one that made it easier to fire bad employees at the Department of Veterans Affairs.

Just over a year ago, Trump signed an executive order to rein in actions of the administrative state.

Republican lawmakers, among them Sen. Mike Lee, R-Utah, also have raised concerns about Congress ceding too much authority to the executive branch and offered proposals to reorganize the bureaucracy.

Under existing civil service law, federal agencies have greater flexibility to hire and fire employees in confidential positions that include determining, making, and advocating policy positions.

However, as Congress has delegated greater policy-related work to executive branch agencies, the interpretation of positions classified as “confidential, policy-determining, policy-making or policy-advocating” hasn’t been updated.

The order primarily will apply to career employees with substantive involvement in creating government policy, such as employees who draft agency regulations and guidance. Line federal workers without policy-related duties will not be affected, officials said.