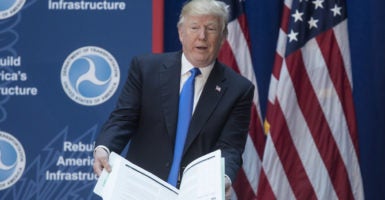 President Donald Trump flips through environmental impact statements for a road while delivering remarks June 9 on infrastructure investment and deregulation at the Department of Transportation in Washington. Lifting rules on building roads is part of his broader infrastructure agenda. (Photo: Michael Reynolds/UPI/Newscom)

President Donald Trump’s regulatory chief said reining in the administrative state is going to require leadership from all three branches of government, but the president’s team is making progress.

Shortly after taking office, Trump issued an executive order that for every single regulation adopted, an agency must drop two.

This approach has helped in reducing costs, said Neomi Rao, administrator of the Office of Information and Regulatory Affairs, which is responsible for overseeing the president’s regulatory agenda.

“I’m here to tell you that nine months in, the president’s agenda is working,” Rao said in remarks Wednesday at The Heritage Foundation. “For fiscal year 2017, which just concluded, across the administration we have more than met the 2-for-1 requirement.”

“We’ve kept regulatory costs to below zero. We didn’t just reduce growth of new costs, but we actually on net reduced more regulatory costs than we’ve imposed,” Rao said. “The scope and pace [at which] deregulation has occurred is truly unprecedented, and we’re just getting started. We’ve removed or postponed more than 860 planned regulations that were in the pipeline.”

Before taking the post in the Trump administration, Rao was a professor at the Antonin Scalia Law School at George Mason University. There she founded the Center for the Study of the Administrative State. Before that, she was the associate counsel to President George W. Bush, the counsel for nominations and constitutional law for the Senate Judiciary Committee, and she clerked for Justice Clarence Thomas in the Supreme Court.

However, restoring a more constitutional government also means Congress must reverse more than a century of deference to executive branch agencies.

“Over the years, particularly since the start of the 20th century, Congress has transferred ever more policy discretion to the agencies,” Rao said, adding:

With only the loosest guidance from Congress, agencies in many areas have the ability to set far-reaching policy through regulation, enforce that policy, and adjudicate that policy. This structure combines the three powers of the federal government and blurs the Constitution’s careful separation of powers. To restore more constitutional accountability, Congress could delegate less authority to the executive branch.

Neomi Rao speech today: I asked my staff for a joke, but it's still going thru cost-benefit analysis so we don't have that yet #reghumor

“Courts should consider whether an agency has any statutory authority for its actions. It means looking at the scope and reach of delegated authority,” Rao said.

“I think courts should also carefully review whether agencies have followed statutory procedures, and they should push back against subregulatory actions that impose new obligations without notice and comment rulemaking,” she said. “I think courts can provide more meaningful checks on agency action and authority, enforcing both statutory and constitutional due process.”

Regulatory agencies frequently are criticized as the fourth branch of government, with federal bureaucrats who operate outside the constraints of the Constitution.

When introducing Rao, Paul Larkin, a senior legal research fellow at The Heritage Foundation, talked about how the Federal Register and regulatory costs expanded during the Obama administration.

“In 2017, where we are today and for the foreseeable future, the administrative state plays at least as great a lawmaking and law-interpreting role as either Congress or the Supreme Court of the United States,” Larkin said.

Rao said the Trump administration is “working on turning around the battleship, and it’s turning.”

Trump’s regulatory agenda can be distilled to having a smaller and more effective regulatory state, and more accountable and responsive administration, Rao said: