Will Hard-Left Turn Lead to Pushback? 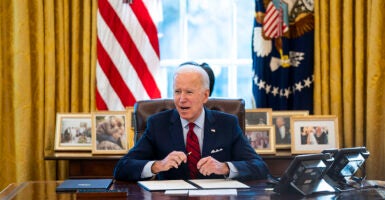 The corruption of the Renaissance Church prompted the Reformation, which in turn sparked a Counter-Reformation of reformist, and more zealous, Catholics.

The cultural excesses and economic recklessness of the Roaring ’20s were followed by the bleak, dour, and impoverished years of the Great Depression.

The Bush-Clinton-Obama continuum of 24 years cemented the bipartisan fusion administrative state. Trump and his “Make America Great Again” agenda were its pushback.

The counterreaction to the populism of the Trump reset—or Trump himself—is as of yet unsure.

President Joe Biden’s tenure may mark a return to business as usual of the Bush-Clinton years. Or, more likely, it will accelerate the current hard-left trajectory.

Either way, it seems that Biden is intent on provoking just such a pushback by his record number of early and often radical executive orders—a tactic candidate Biden condemned.

On almost every issue—open borders, blanket amnesties, canceling the Keystone XL pipeline, promoting the Green New Deal, and hard-left appointees—Biden is touting positions that likely do not earn 50% public support.

When Biden made a Faustian bargain with his party’s hard-left wing of Bernie Sanders, Kamala Harris, Elizabeth Warren, and Alexandria Ocasio-Cortez to win the election, he took on the commitment to absorb some of their agenda and to appoint their ideologues.

But he also soon became either unwilling or unable to stand up to them.

Now they—and the country—are in a revolutionary frenzy. The San Francisco Board of Education has voted to rename more than 40 schools honoring the nation’s best—Washington, Jefferson, and Lincoln—largely on racist grounds that they are dead, mostly white males.

The iconic dates, origins, and nature of America itself continue to be attacked to meet leftist demands. And still, it is not enough for the new McCarthyites.

Trump likely lost his second pushback term for two reasons—neither of which had anything to do with his reset agenda.

First, the sudden 2020 pandemic, quarantine, recession, summer-long demonstrations and riots, and radical changes in voting laws all ensured that 100 million ballots were not cast on Election Day, derailed a booming economy, and finally wore the people out.

Second, Trump underestimated the multitrillion-dollar power and furor of Silicon Valley, Wall Street, the media, Hollywood, and the progressive rich. Those forces all coalesced against him and swamped his outspent and outmanned campaign.

With 24/7 blanket ads, news coverage, endorsements, and social media messaging, Trump sometimes was easily caricatured as a twittering disrupter. The inert and mute Biden in his basement was reinvented as the sober and judicious Washington “wise man” antidote to Trump’s unpredictability.

Had Biden continued his moderate campaign veneer, the current left-wing radicalism might not have prompted a counterreaction.

Instead, Biden is now unapologetically leading the most radical left-wing movement in the nation’s history.

Pundits thought Biden’s prior hints of a single four-year term would make him a weak lame duck. Instead, the idea of just one term has liberated the 78-year-old Biden. We forget that septuagenarians can be as reckless as 20-year-olds. Some old guys can feel their careers only have a few remaining years and might as well go out with a bang—and a legacy.

For now, Biden enjoys a congressional majority for the next 24 months. He has no plans to run for reelection. He sees both realities as a liberating blank check to accomplish what the much more heralded rock star Barack Obama never could.

Experts assured voters that Biden would work on a bipartisan consensus and bring back “normality.” He would “unite” the country.

That will not happen. How ironic that Biden will not just be pushed and pressured by the radicals whom he brought to power, but he may be leading them forward to cement an even harder-left legacy.

Will there be a reaction to this extremism?

The left is assured that radical changes in voting laws and demography, the fears of COVID-19, the Antifa-Black Lives Matter uprising, and anger at Trump over the Jan. 6 Capitol riot have all permanently changed the electorate—and pushed it further leftward.

If they are wrong, they have instead alienated and insulted the American people, and will reap the whirlwind in 2022 of the wind they are now sowing.

(C)2021 The Center for American Greatness.