Is Another Civil War Likely? A Historian Says ‘No,’ but We Should Still Be Concerned 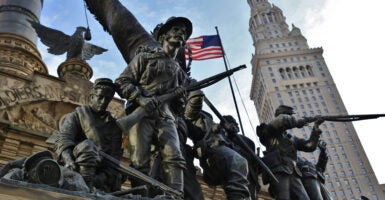 In the past few years, Civil War figures from Confederates to Abraham Lincoln have been denounced, and in the case of statues and monuments, removed and torn down. But have we learned anything from the great calamity that beset the nation in the 1860s?

Increasing American polarization, the political unrest that left neighborhoods in ruins in 2020, and the violence that took place at the U.S. Capitol on Jan. 6 have many Americans worried that the country may slip into a second civil war.

Historian and Civil War expert Allen Guelzo, a visiting scholar at The Heritage Foundation, spoke on a virtual Heritage panel discussion, “Another Civil War? The Struggle Over the Meaning of America,” on Tuesday about what a civil war would mean in modern America, and offered his assessment of how likely one is in the next few years.

Guelzo said that civil war is not a topic to take lightly, explaining that another civil war would be a disaster unlike anything Americans have experienced in the past century and a half.

“There is no civil calamity greater than the two words we have in view today; not plague, not a depression, not even war itself,” Guelzo said. “And it is my earnest hope that no one listening to us will take those two words into their mouths with anything except a sense of horror and revulsion.”

The American Civil War was short-lived, but its consequences for the country were terrible and continued to affect the generations that followed, he said.

“Americans have endured one civil war, and though by the standards of civil conflicts of world history, ours was comparatively brief, only four years, compared to the 20 years of the Taiping Rebellion in China in the 1850s and ’60s and the English Civil War of 1642 to ’53, yet its costs were heart-stopping,” Guelzo said.

Those costs were 750,000 Americans dead, wounded, maimed, or missing, and “a federal veterans pension list so big that for a half-century afterward it was the single largest item in the federal budget.”

That’s why Guelzo warned of those looking toward a future of an America embroiled in civil war, adding that we “must never let those two words pass our lips lightly, or even worse, seriously.”

Unfortunately, many Americans now think that civil war is looming in the country’s near-term future.

A Rasmussen poll in 2018 found that 31% of Americans think a civil war was likely in the following five years. More recent polls showed similar results.

The challenge facing the country, Guelzo said, is that the cultural and political divisions are deep and go beyond simple partisanship.

“That division began, in the long run, in the 1970s, and with each succeeding decade, the fissures have become wider and wider, so that the two national parties now represent utterly incommensurate views on American life,” Guelzo said. “We cannot even agree on what year marks the American founding.”

He was referring to the debates around American history that have become ferocious. The New York Times’ 1619 Project, for instance, posits that the country’s true founding was in 1619 when African slaves were first brought to the Virginia colony, as opposed to the traditional founding date of the United States in 1776.

As serious as the cleavages in American life are, Guelzo said he doesn’t think civil war is inevitable or likely.

First, he said there are no clear political boundaries between the sides. Conservative states have many liberal voters and vice versa.

Second, he said the lethal force that could be deployed by the military is far greater than in the past and that a violent uprising could be more easily crushed.

But that doesn’t rule out a period of general civil unrest, however. Guelzo pointed to three possibilities.

The first is political; namely, state governments refusing to obey or enforce laws passed by Congress. That already happens to some extent, he said, as states defy federal anti-drug and immigration laws.

“We call this nullification, following the pattern of South Carolina, which 190 years ago attempted to nullify congressionally imposed tariffs. And state legislatures have in fact been practicing nullification for some time in the form of marijuana normalization, sanctuary cities, and so forth, and without any serious penalty,” he said.

That does little more than foster the “disease” of anarchy, according to Guelzo.

The second form of unrest could be social upheaval. We could see the creation of more “no-go zones” and other lawlessness similar to what happened with Seattle’s Capitol Hill Autonomous Zone in the summer of 2020, he said.

Finally, the potential unrest could take the form of personal violence against fellow Americans, such as Timothy McVeigh’s Oklahoma City bombing or the attempted assassination of Rep. Steve Scalise, R-La., and other congressmen by a left-wing extremist at a baseball field in Alexandria, Virginia, in 2017.

“I describe these possibilities with a sinking heart,” Guelzo said. “I do not describe them because I nevertheless expect them as a … likelihood. For all the polarization we see in public life, poll after poll shows that ordinary Americans do not see themselves in the Manichean terms of our politicians and media.”

Americans across the political spectrum should step back from the brink of civil discord, Guelzo said, and imagine the horror of what that would mean for the country’s future.

“Let all talk of a civil war be of a historical curiosity, and let us rather go forward in our united strength,” he concluded.