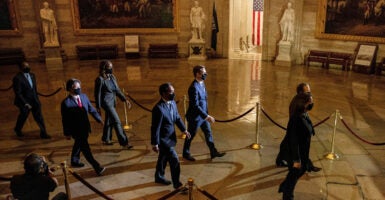 A majority of the Senate last week decided that it can lawfully begin a trial on the House-approved article of impeachment, even though former President Donald Trump no longer holds federal office.

The majority is wrong.

Princeton political science professor Keith Whittington argued in a Jan. 22 Wall Street Journal opinion essay that the Senate can try Trump on the House-passed article of impeachment even though Trump left office on Jan. 20. Whittington is not a lawyer, but 170 legal scholars published an argument reaching the same conclusion.

All argue that the impeachment power reaches current and former officials. Otherwise, an official could resign on the eve of conviction and prevent the Senate from including in its judgment a provision rendering the official ineligible to hold federal office again, as Article I permits.

Beyond that, English practice allowed Parliament to expose and censure wrongdoing by the crown’s former agents, as well as prevent them from later abusing power.

That is a reasonable argument, but it runs up against a problem.

England has never had a written constitution. Aside from Parliament’s legislation, history and tradition have long governed how Parliament, government ministers, and the bureaucracy perform their responsibilities.

Our Framers chose, however, to use a written charter to establish, allocate, and limit the powers of the federal government, including Congress. That decision has been critical ever since 1803, when the U.S. Supreme Court held in Marbury v. Madison that all government conduct must comply with our written Constitution.

The result is that, while Parliament might have a long history of impeaching former officials and barring them from future government service, Congress can do so only if the Constitution permits. That is where the roadblock lies.

For the Senate to brand Trump with a scarlet “I” as being “Ineligible” for future federal office, there are three requirements.

Article I of the Constitution defines the first two. The first one is satisfied: The House has already impeached Trump. The second requirement will become ripe only if the Senate convicts him and its “Judgment” includes a “disqualification to hold and enjoy any Office of honor, Trust or Profit under the United States.”

Yet, there is a third requirement. Article II provides that “[1] The President, [2] Vice President and [3] all civil Officers of the United States, shall be removed from Office on Impeachment for, and Conviction of, treason, Bribery, or other high Crimes and Misdemeanors.”

Article II is as important as Article I, because it identifies who may be removed and barred from future office-holding. Unfortunately—or not—that last requirement cannot be satisfied as a matter of law in Trump’s case.

By defining those three categories, Article II limits removal and future ineligibility only to current officeholders. After all, the 20th Amendment defines the president’s term as four years (with a possible second term). Once a president leaves office, as a matter of law, he or she is no longer president and, therefore, cannot be “removed” from that office.

Put simply, the Senate cannot remove someone from a position that he no longer holds, and only people so removed can be barred from holding federal office again.

Remember, the impeachment process was designed to prevent someone from abusing the powers of his office. Ordinarily, as the Supreme Court held in Myers v. United States, it is the president’s Article II responsibility to decide whether to remove federal officials for misconduct. Article I just makes sure that the public can be protected if the president falls down on the job.

That goal is achieved once a person returns to private life. Just as someone who resigns from office (or dies) before abusing his or her authority cannot thereafter abuse the power once held, so, too, a person who resigns before being impeached and removed cannot abuse the public trust.

After all, a former president cannot exercise any of the powers that Article II vests in the president.

Neither Jimmy Carter nor Bill Clinton, neither George W. Bush nor Barack Obama—nor Trump—can act as “Commander in Chief,” “require the Opinion in writing” of Cabinet officials, “grant Reprieves and Pardons,” “make Treaties,” and “appoint” federal “Officers” (the latter two with the Senate’s consent).

That’s why Trump had to scramble on Jan. 19 to complete his last-minute efforts to grant clemency and pardons before Joe Biden became president on Jan. 20. A Trump pardon issued today isn’t worth the paper it would be printed on.

There’s only one precedent for congressional removal of a former executive official; namely, the 1876 impeachment of Secretary of War William Belknap. Its permissibility was highly disputed at the time, and it has not been repeated.

In fact, in the 2010 case of U.S. District Court Judge Samuel Kent, the House approved a post-impeachment resolution asking the Senate to drop further proceedings against Kent because he had resigned in the interim.

Without a recorded dissent, the Senate ordered the Kent articles of impeachment to be dismissed. Precedent, therefore, goes both ways.

Whittington and the 170 scholars might think that Trump is a scoundrel. Regardless, the Senate can no more remove Trump for his lamentable speech and inaction on Jan. 6 than it could remove Clinton for his abusive exercise of the pardon power on Jan. 19, 2001.

In fact, if Congress can disregard the Article II current officeholder requirement, what bars Congress from targeting in advance people who have never held office to receive the same scarlet “I”?

If someone leaves the presidency under the shadow of impeachment and removal, future voters are highly unlikely to reelect him or her as president. What the 170 scholars want is to prevent the public from making that decision.

It is just a tad pretentious, however, to say that the public cannot be trusted with making that judgment, even if voters occasionally err in evaluating the character of the people they elect.

If Congress wants to publicly spank and humiliate Trump, it has options. Trump will receive a pension, but that’s only a statutory benefit that Congress can revoke because Article II guarantees a president a fixed “Compensation” only “during the Period for which he shall have been elected,” which is now over.

If Congress wants to punish him for what happened on Jan. 6, aside from censuring him, it can withdraw those benefits and let Trump, a billionaire, pay his own bills.

To be sure, that option will not satisfy anyone who wants Trump’s head on a pike, but it is legally permissible. Conducting an impeachment trial against now-private citizen Trump is not.