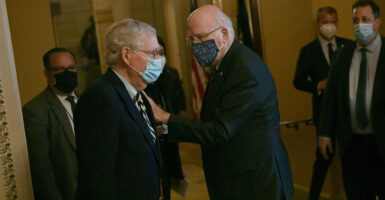 The sequel to Donald Trump’s impeachment trial will begin about one year after the Senate voted to acquit him the first time.

House impeachment managers delivered an article of impeachment Monday to the Senate, where Trump’s second trial is set to begin Feb. 8. Senators on Tuesday took an oath to be impartial, as they did ahead of last year’s trial.

The biggest difference, of course, is that the 2020 trial was of a president during an election year, with the verdict focused on whether to remove Trump from office. The upcoming verdict on whether Trump incited insurrection will determine whether Citizen Trump will be disqualified from holding future federal office.

But plenty of other changes will be evident as well, some of which haven’t been determined. Here’s a look at differences between the two impeachment trials.

1.  Who Presides Over the Trial

The Constitution says, “When the President of the United States is tried, the Chief Justice shall preside.”

Chief Justice John Roberts presided over the Senate trial of Trump last year. However, Roberts declined to do so this time around, since Trump no longer is an officeholder.

In his place is Senate President Pro Tempore Patrick Leahy, D-Vt., the longest serving senator of the majority party.

“The president pro tempore has historically presided over Senate impeachment trials of non-presidents,” Leahy said in a written statement, adding:

When presiding over an impeachment trial, the president pro tempore takes an additional special oath to do impartial justice according to the Constitution and the laws. It is an oath that I take extraordinarily seriously.

When I preside over the impeachment trial of former President Donald Trump, I will not waver from my constitutional and sworn obligations to administer the trial with fairness, in accordance with the Constitution and the laws.

Leahy spokesman David Carle told The Daily Signal that Senate leaders, not the presiding officer, would work out details of the rules for the trial.

2.  When the Target Isn’t in Office

Sen. Rand Paul, R-Ky., forced a vote Tuesday on a resolution asserting that a Senate trial for a former officeholder and private citizen would be unconstitutional.

Paul’s resolution failed, but gained votes from 45 out of 50 Republicans. One of them was Minority Leader Mitch McConnell, R-Ky., who has been critical of Trump since the Jan. 6 riot at the Capitol.

The five Senate Republicans who voted with all the Democrats to proceed with the trial were Lisa Murkowski of Alaska, Pat Toomey of Pennsylvania, Mitt Romney of Utah, Susan Collins of Maine, and Ben Sasse of Nebraska.

Although the vote foreshadowed what most already knew—a conviction of Trump by two-thirds of senators is near impossible—the debate over jurisdiction likely won’t end.

A key part of the constitutional argument revolves around the word “and.”

The Constitution states that punishment upon conviction “shall not extend further than to removal from office, and disqualification to hold and enjoy any office of honor, trust or profit under the United States.”

Only after a two-thirds supermajority vote to convict can the Senate take a separate vote—requiring only a simple majority—to disqualify someone from holding a future federal office.

The closest historical parallel is the case of former War Secretary William Belknap, who resigned in 1876 to avoid impeachment during a corruption scandal. The House impeached Belknap anyway and sent five articles of impeachment concerning bribery to the Senate.

Nevertheless, the Senate haggled over whether it had jurisdiction to try Belknap, who no longer held office. After much debate and a narrow 37-29 vote, the Senate determined that it could try the case.

The Senate later voted 35-25 to convict Belknap, short of the supermajority needed.

“The Democrats know they can’t get a conviction to disqualify Trump, but the trial itself could do maximum damage to Trump’s reputation, while also forcing Republican senators to go on the record,” Thomas Jipping, a former chief counsel for the Senate Judiciary Committee, told The Daily Signal.

The weakness in trying to force Republican senators on the record is the process argument, noted Jipping, who played a role in the 2010 Senate impeachment trial of U.S. District Judge Thomas Porteous of the Eastern District of Louisiana. Jipping now is a senior legal fellow at The Heritage Foundation.

Voting against conviction wouldn’t be an automatic show of support for Trump, but rather express concern about the constitutionality of voting to convict a private citizen, Jipping said.

Of the 25 senators who voted to acquit Belknap, 22 said their votes primarily were based on the view the Senate had no jurisdiction over an official who had resigned.

Other examples of impeachment after an individual leaves office include three federal judges who resigned after being impeached by the House. The Senate nixed a trial in each case.

In 2009, the House impeached District Judge Samuel Kent of the Southern District of Texas over allegations of sexual assault and obstructing an investigation. Kent resigned from a prison cell, and senators terminated his trial.

In 1926, the House impeached District Judge George English of the Eastern District of Illinois for abuse of power. He resigned and the Senate dismissed the case.

In 1873, the House impeached District Judge Mark Delahay of the District of Kansas on charges of intoxication on the bench. Delahay resigned before his trial and the Senate didn’t proceed.

In the very first House impeachment, lawmakers impeached Sen. William Blount in 1797 on charges of conspiring with Great Britain. The Senate, which already had expelled Blount, declined to consider the impeachment.

It remains the only time the House has impeached another member of Congress.

3. What About Witnesses This Time?

Senate Majority Leader Charles Schumer, D-N.Y., will hammer out details of the trial and, with the chamber’s 50-50 split, is expected to include McConnell.

The House managers prosecuting the case reportedly are mulling whether to call witnesses.

Trump’s previous Senate trial was the first impeachment trial of a president not to include witnesses. The trial of Bill Clinton in 1999 had three witnesses give depositions in recorded video shown to the full Senate. The trial of Andrew Johnson in 1868 was a grand affair with 25 prosecution witnesses and 16 defense witnesses.

In the trial of Belknap, a former Cabinet official, more than 40 witnesses were called.

That said, the previous Trump trial didn’t set any new precedent on witnesses. The rules for the Clinton trial and the earlier Trump trial were nearly identical in granting each side—the House managers and the president’s defense team—24 hours each to present their case. Questions and answers from senators followed.

Senate impeachment rules specify that senators vote on whether to allow witnesses.

“This is a much more simpler, straightforward charge than the previous impeachment, where details were foundational,” Jipping said of Trump. “In this charge, there is less need for witnesses.”

4. Who’s in New Cast for Sequel

Based in Columbia, South Carolina, Bowers is a JAG officer and colonel in the South Carolina Air National Guard, the Charleston-based Post and Courier newspaper reported. He received his law degree from Tulane University in 1998.

After law school, Bowers went to work at the family law firm of South Carolina’s current governor, Henry McMaster, a Republican. Bowers served as lead counsel at the time for the South Carolina Repuoblican Party.

He also is a former chairman of the South Carolina Election Commission. He did a stint in the U.S. Justice Department during the George W. Bush administration, as special counsel on voting matters.

In 2009, Bowers represented South Carolina’s sitting governor, Mark Sanford, and helped the Republican avoid impeachment. Sanford had left the state for a week to visit his mistress in Argentina while telling staff he was hiking the Appalachian Trail.

Bowers later represented then-South Carolina Gov. Nikki Haley in 2015 before the state’s ethics commission when the Republican faced an allegation made while she was a member of the state Legislature.

Joining Bowers for the Trump impeachment trial is Deborah Barbier, a fellow Columbia lawyer and former federal prosecutor, the Post and Courier reported.

From 1996 to 2011, Barbier worked in the criminal division of the U.S. Attorney’s Office for the District of South Carolina. She was deputy chief of the general crimes section, chief of the asset forfeiture unit, and chief of the civil division.

Barbier received her law degree from the University of South Carolina. After going into private practice, she defended Joey Meek, a friend of Charleston church shooter Dylann Roof. Meek pleaded guilty to telling others not to share information with police on what Roof was planning.

Acting as prosecutors in the Trump impeachment trial will be the nine House managers appointed by House Speaker Nancy Pelosi.

The managers, or prosecutors, in the first Trump trial included heavy hitters among House Democrats such as Intelligence Chairman Adam Schiff of California and Judiciary Chairman Jerry Nadler of New York.

In place of Schiff, the leader of the team will be Rep. Jamie Raskin, D-Md., a former law professor at American University and advocate since 2017 of using the 25th Amendment to remove Trump from office.

Rep. Eric Swalwell, D-Calif., currently faces questions about his relationship with an alleged Chinese spy, Christine Fang. Swalwell, who has denied any wrongdoing, was a staple on cable news for criticizing Trump over since-disproven allegations about conspiring with Russia.

Before he was elected to the House, Rhode Island’s David Cicilline was the mayor of Providence and the first openly gay mayor in the United States.

Other prosecutors include California’s Ted Lieu, a former Air Force prosecutor; Texas’ Joaquin Castro, who first called for Trump’s impeachment in 2017; and Stacey Plaskett, who represents the Virgin Islands as a nonvoting House member.