Conservatives Again Seek to Protect Down Syndrome Babies From Abortion 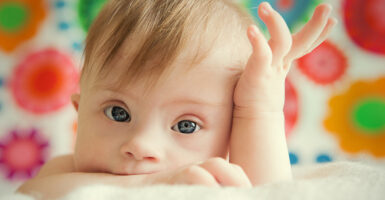 Legislation to prevent the abortion of babies diagnosed with Down syndrome has been reintroduced by Rep. Ron Estes, R-Kan., and Sen. Jim Inhofe, R-Okla. (Photo: Eleonora_os/Getty Images)

Two conservative lawmakers again moved to protect one of America’s most vulnerable populations by reintroducing legislation to prevent the abortion of babies diagnosed with Down syndrome.

In America, a Down syndrome diagnosis for an unborn baby results in abortion 67% of the time, according to Healthline.

“It’s tragic that in the United States babies are being targeted simply because they have one more chromosome,” Rep. Ron Estes, R-Kan., said in a formal statement. “This legislation is about ensuring that the rights of individuals with disabilities are protected.”

Sen. Jim Inhofe, R-Okla., joined Estes in reintroducing the Protecting Individuals with Down Syndrome Act, which would prevent abortion of an unborn baby simply because of a Down syndrome diagnosis.

Their bill would allow the baby’s father, or maternal grandparent if the mother is a minor, to take civil action against violators of the law. The bill also would guard the mother from being prosecuted or held liable for any violation of the measure. It also would prioritize the mother’s privacy in all court proceedings.

Reintroduction of the legislation comes within a week after the 48th anniversary of the Supreme Court’s landmark abortion case, Roe v. Wade. On Jan. 22, 1973, the high court ruled 6-3 that the Constitution protects a woman’s right to choose to terminate her pregnancy, paving the way for more than 62 million children to be aborted in America.

Friday marks the 48th annual March for Life in Washington. Organizers said that because of the pandemic and the Capitol riot, this year’s march will be virtual and encouraged individuals to watch the rally Friday at noon EST.

Instead of a crowd of thousands, a small group of pro-life leaders will gather to march from the National Mall to the Supreme Court in support of the unborn.

South Dakota this week became the latest state to introduce legislation to ban the abortion of babies with Down syndrome. Eight other states already have passed legislation to protect those unborn children.

“I look forward to the day when the Supreme Court recognizes that all preborn children inherently possess this right to life, too,” South Dakota Gov. Kristi Noem said in a public statement Monday. “Until that time comes, I am asking the South Dakota legislature to pass a law that bans the abortion of a preborn child just because that child is diagnosed with Down syndrome.”

The question of the constitutionality of abortions based upon sex, race, or diagnosis of a disability, including Down syndrome, came before the Supreme Court recently in a challenge of Indiana’s ban on Down syndrome abortions.

The high court, however, declined to rule on the constitutionality of such abortions.

Among pro-life organizations endorsing the federal legislation from Estes and Inhofe are Susan B. Anthony List, National Right to Life, and National Pro-Life Alliance.