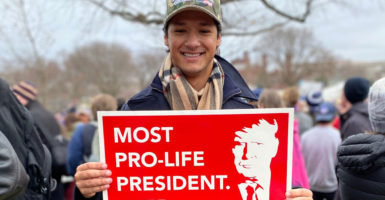 "It's really great to be here for such a great cause," Dimitri Kearney, 21, says Friday at the March for Life. (Photo: Virginia Aabram/The Daily Signal)

Tens of thousands of men, women, and children from across the nation gathered in Washington to declare their belief in the sanctity of life and protest abortion as the taking of life.

The 47th annual March for Life, like its predecessors, protested the Supreme Court’s landmark 7-2 ruling in Roe v. Wade in 1973, which legalized abortion on demand across the nation. This time, the march featured a speech by President Donald Trump, who became the first president to attend.

Meet eight of the regular Americans who joined the march.

“I had an abortion when I was younger, and I feel very strongly that it was a mistake,” Gisele Flores says, when asked why she was at the March for Life. “You live with that for the rest of your life.”

She and her future husband aborted their first child when they were dating, Flores, 60, says. It wasn’t until she became a Christian, she says, that she realized that what she aborted was a human life.

“When I was saved 30 years ago, and I found out that I was a sinner who needed a savior, one of the first things that came up is that I thought about my first child, and how that child was a human life and that I had made a huge mistake,” Flores says.

Although Flores is actively involved now in the pro-life movement, she says her mother remains extremely pro-abortion after being raised in Nazi-occupied France.

“They had Nazis living with them for five years, and my mother absorbed that mindset,” Flores explains. “She’s anti-Semitic, very pro-abortion, and does not believe in life at all. I have four girls, and every time I was pregnant, my mother told me to abort.”

One of those daughters now works in the pro-life movement in Washington, D.C., promoting adoption over abortion.

Tim Johnson, 60, says he has been avidly pro-life for his whole life, and he finally made it out to the March for Life this year.

A fan of the president, Johnson says he decided late Thursday that he ought to go to support the movement and hear Trump and evangelist missionary Franklin Graham speak at the rally Friday.

Johnson says he drove from Madisonville, Kentucky, to Nashville, Tennessee, where he caught a plane to Washington and made it in time for the president’s address.

Johnson says his son, now 33, was born with major heart defects. About one in 1,000 babies are born with such a condition. Doctors encouraged abortion, Johnson says, but he chose life for his son.

Johnson says his son had to undergo open heart surgery at 6 years old, but has lived a healthy life since. He argues that the medical community can do more rather than look at abortion as an easy out.

“My son, he’s a missionary to Haiti. He’s a nurse practitioner, he takes a medical team down there, he is living a vibrant and active life,” Johnson says. “To think that someone could have tried to bring that to an end.”

Johnson says he has studied the issue of abortion since he was a teenager, and wants everyone to choose life because it is a moral issue.

“When someone aborts life, they’re aborting their own eternal life,” he says.

For Union University freshman Nicholas Bitterling, 18, a passionate pro-life advocate, standing for life is an essential part of being a Christian.

Union University’s Life 139, a pro-life organization inspired by Psalm 139: 13-16, brought a group of students to the march from the school in Jackson, Tennessee.

“It’s pretty obvious to see when looking at an ultrasound; you see a baby,” he says. “You can’t look at it and see a clump of cells … It’s another person, it’s very obviously another person.”

Bitterling says he strongly believes that all life matters, no matter what shape or size, and that he attended the march to stand up for all human lives.

“I think all murder is wrong, and it doesn’t matter—as my sign says—how big someone is,” he says.

Bitterling made his own sign for the March for Life featuring the character Baby Yoda from Disney’s “The Mandalorian,” the latest TV spinoff of the “Star Wars” movie franchise.

The sign displays a quote from the movie “The Empire Strikes Back,” when Yoda admonishes Luke Skywalker for doubting his power because of his size.

Linda Laudiero, 59, says she has been going to the March for Life for nearly 40 years, and in that time her commitment to the movement has never wavered.

“I’m here because I was a little baby one time,” Laudiero says. “Because life is sacred from conception, and if you don’t protect the babies in the womb, that you won’t protect life outside is evident.”

She says she was especially excited for this year’s march because of Trump’s presence.

In the nearly 40 years since she first started participating in the march, Laudiero says, she has noticed more young people attending and the event has become better organized.

St. Joseph Catholic High School students A.J. Rotkis, 16, and Jonathon Liu, 17, attended the March for Life with their school and snuck away to hear Trump deliver his speech.

Because Trump is the first president to attend the event, Liu says, he thought he also could make a difference in the pro-life movement by marching.

“I’m here because I think it’s remarkable how such a high percentage of the country could think that this is OK,” Liu says of abortion. “I think that anyone with common sense knows that this is wrong.”

Both students say they participated out of a moral conviction that abortion is wrong.

“My parents taught me that abortion is wrong because every person deserves the right to life, liberty, and happiness, and to take that away is just not good,” Rotkis says.

Dimitri Kearney, 21, says his Catholic faith inspired him to demonstrate against abortion.

“Being Catholic, I really value and respect life,” Kearney says. “It’s really great to be here for such a great cause.”

His time at Ave Maria University in Florida gave him the opportunity to put those beliefs into action by going to the March for Life for the first time.

“I know [abortion is] an important thing, especially from being at Ave Maria, which has a very strong Catholic faith,” Kearney says. “I also knew that Trump was speaking, and I wanted to come for that.”

This was the first time that Amber Dabish, 17, attended the March for Life.

“I’ve always wanted to come, and since my school offered a trip, I was really glad to be able to come,” Dabish says.

She says she believes strongly in the mission of the pro-life movement.

“I believe that the March for Life is important because every life matters,” she says. “Everyone has a right to life.”