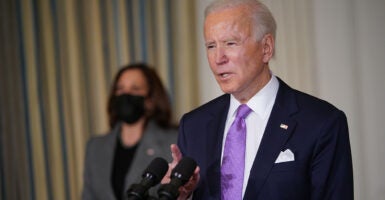 President Joe Biden focused on the theme of unity in his inaugural address.

“Today, on this January day, my whole soul is in this: bringing America together, uniting our people, and uniting our nation,” he said.

It sounds so nice. But only a career politician can be this disingenuous and speak the words as if he were so, so sincere.

If Biden’s top priority were really unity, would he really have allowed a trial of former President Donald Trump to move forward in the Senate? Or immediately signed 30 executive orders in his first three days in the Oval Office, many of which focused on undoing and dismantling Trump’s policies?

Such actions immediately alienate the 74 million Americans who voted for Trump.

Appreciating that if you want to know what someone is about, pay attention to what they do, not what they say, it is obvious that Biden’s concern is advancing the left-wing agenda of his party, not unity.

On the other hand, there probably wouldn’t be much difference with a Republican president. Republicans would be pushing for the president to advance their agenda. The game is to defeat the opposition, not unity.

So, what about unity? Is unity something we should care about?

After all, this is the United States of America, so named by the Founders in 1776.

Eleven years later, in 1787, the Constitution was adopted, the preamble of which explains its purpose to “form a more perfect Union.”

The glue holding together what the Founders called the United States is adherence to the principles upon which the country was founded. We can read them clearly in the Declaration of Independence:

[A]ll men are created equal … they are endowed by their Creator with certain unalienable Rights, that among these are Life, Liberty and the pursuit of Happiness. … That to secure these rights, Governments are instituted among Men.

The country is about individual freedom and the purpose of government to protect that freedom. The Constitution was designed to define more clearly legitimate tasks of the federal government, and to keep government within those boundaries. This is what makes us the United States.

Unity broke down and led to civil war because one of the core principles—protecting the rights of all men—was violated by the presence of slavery.

When we all accept the core principles that enable us to be free and the limited role of the federal government as defined in the Constitution, we function successfully as a unified country, and we grow and prosper.

It means each of us respects the uniqueness and freedom of each of our neighbors.

Reading through Biden’s laundry list of what he calls unity, we see a list of everything that pulls us apart: “We can right wrongs. We can put people to work in good jobs. We can teach our children in safe schools. … We can reward work, rebuild the middle class … We can deliver racial justice. We can make America, once again, the leading force for good in the world.”

I would never rely on Biden to define for me right and wrong, to decide how to create “good jobs” or “rebuild the middle class.”

Biden’s idea of unity is more government and more politics. This means forcing all Americans to buy into his values—something that will never happen—and the idea that government can micromanage our lives.

This is exactly where things have been going, and this is why it’s all breaking down.

We should indeed strive for unity—unity around the principles upon which the nation was founded.