Left-Wing Journalists Suddenly Have a Problem With Free Speech 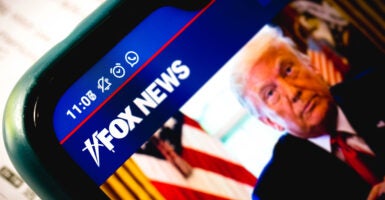 Some left-wing journalists have called for cable companies to deny subscribers access to the Fox News Channel, Newsmax, and other channels they don't like. (Photo: Rafael Henrique/SOPA Images/LightRocket/Getty Images)

As President Joe Biden took office Jan. 20 with calls for unity, his allies in the mainstream media are beating the drum for squashing political dissent, large or small, and keeping it from being heard by the American people.

It’s amazing how “Resist”—once the proud motto of progressive activists—has instantly been turned on its head with the changing political winds.

It seems that “resistance” is now “insurrection,” to be smashed by any means necessary. And these calls are being led not just by liberal activists, but also by journalists, people who should be expected to be champions of free speech.

To say that using the government in this way would be a threat to the First Amendment would be an understatement.

Oliver Darcy, a journalist at CNN, wrote in a column that news outlets such as One America News Network, Newsmax, and the Fox News Channel should have their plugs pulled by cable companies for “disseminating disinformation about the November election results to audiences of millions.”

“We are going to have to figure out the OANN and Newsmax problem,” Alex Stamos, a former chief security officer at Facebook, told CNN’s Brian Stelter on Sunday. “These companies have freedom of speech, but I’m not sure we need Verizon, AT&T, Comcast, and such bringing them into tens of millions of homes.”

Perhaps it shouldn’t be surprising to see a big tech executive call for suppressing speech. After all, a cabal of social media companies effectively erased then-President Donald Trump from their platforms after the Jan. 6 rioting at the Capitol.

Not only that, but they effectively shut down Parler, a Twitter alternative, for what they said was a violation of their terms of service. That may be so, but it’s hard not to see these actions as a heavy-handed attempt to crush even the slightest opposition to their control of the messages the American people can see and hear.

As I wrote at the time, the Jan. 6 violence at the Capitol is being used as an excuse to call for muzzling political opposition and to label all supporters of Trump—and right-leaning Americans in general—as a danger to the republic.

It’s bad enough to see powerful companies use such methods, but it’s even more disconcerting to see journalists cheerleading them on.

And some in the media weren’t just calling for private companies to eradicate conservative speech.

Washington Post columnist Max Boot—another CNN commentator—not only echoed those calls for cable companies to shut down speech he doesn’t like, he floated the idea of using government power to do it.

“CNN (where I’m a global affairs analyst) notes that the United Kingdom doesn’t have its own version of Fox News, because it has a government regulator that metes out hefty fines to broadcasters that violate minimal standards of impartiality and accuracy,” Boot wrote. “The United States hasn’t had that since the Federal Communications Commission stopped enforcing the ‘fairness’ doctrine in the 1980s. As president, Biden needs to reinvigorate the FCC. Or else the terrorism we saw on Jan. 6 may be only the beginning, rather than the end, of the plot against America.”

The so-called “fairness” doctrine that Boot is suggesting is a throwback to the last time Democrats held control of both Congress and the executive branch after the election of President Barack Obama in 2008.

The Reagan administration, as Boot wrote, ended the Fairness Doctrine in the 1980s, paving the way to the explosion of conservative talk radio.

Clearly, there was a huge audience waiting to hear a different message than what the mainstream media were delivering. To the left, that was intolerable.

After Obama’s election, left-wing commentators and political leaders made an aggressive push for the FCC to effectively silence talk radio, a medium that conservatives continue to dominate.

The Fairness Doctrine, a relic of the New Deal era, forced radio stations to give equal airtime to both sides of the political spectrum. There might have been some justification for the law when radio was the primary medium of mass communication, but from the very beginning, the Fairness Doctrine was used as a stealthy way to suppress political dissent.

It was particularly telling that those calling for a return to the Fairness Doctrine wanted it to apply specifically to talk radio, and not, say, the media the left dominated.

And what would giving “equal time” to views even look like in 2021?

The progressive elite’s idea of political balance is giving some airtime to nominal “conservatives” like Boot and his fellow Washington Post columnist Jennifer Rubin, who use most of their time telling their readers why conservatives and Republicans are bad.

When Democrats tried to revive the Fairness Doctrine in 2008, the naked attempt to neuter conservative talk radio was as thinly veiled as the “robe” worn by the fabled emperor with no clothes. The movement fizzled out as conservatives were roused to oppose it, and Democrats were crushed in the 2010 midterm elections, in which they lost 63 House seats and six in the Senate.

That effort to muzzle speech failed more than a decade ago, but would a renewed and more ruthless attempt to silence critics really be a surprise? The media landscape has changed since 2008, with social media and other online platforms becoming even more dominant.

The result of this is that many media gatekeepers feel even more threatened by their loss of control of the “narrative” and their waning credibility in the eyes of many Americans.

This time, it might not just be conservative talk radio on the chopping block, but all other forms of right-leaning or generally anti-establishment media, too.

It’s a disturbing, albeit predictable, trend unlikely to bring more unity to a deeply divided nation.