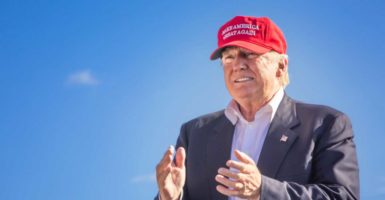 King, the senior justice writer at the Daily News, announced the project on Monday via Facebook. Currently, the project’s website calls for a boycott of various companies: the founders, owners, or CEOs of which supported the Trump campaign, financially or otherwise.

Targets of the boycott include businesses like the Chicago Cubs baseball team, the New England Patriots football team, Hobby Lobby, Home Depot, and the Trump Hotel Collection. In addition to the phrase “Boycott Trump” emblazoned across the webpage, the resistance’s website reads:

Each of these companies have founders, owners, or CEOs who are prominent supporters of Donald Trump. Here’s the thing—that’s their choice. They chose to help put him into office, knowing full well what it meant to tens of millions of Americans. However, it is also OUR CHOICE, and a choice we must make, to withdraw our support from any person or corporation which supports this man and what he stands for …

When your CEO or chairman or primary investor makes a public endorsement, or gives millions of dollars to fund Donald Trump, they deserve to be held accountable for that position.

We MUST make our money stand for the values and the people that we believe in. Otherwise, we are funding the very oppression, bigotry, and discrimination that we claim to hate.

King is no stranger to this form of protest. Earlier this year, he proposed an “Injustice Boycott” of “cities, states, businesses, and institutions which are either willfully indifferent to police brutality and racial injustice or are deliberately destructive partners with it.”