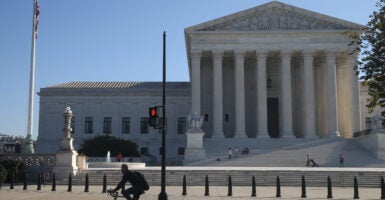 The Supreme Court on Jan. 12 heard the case of Uzuegbunam v. Preczewski, arising from a curtailing of free speech rights on a Georgia college campus. (Photo: Yegor Aleyev/TASS/Getty Images)

The Supreme Court heard oral arguments Jan. 12 in Uzuegbunam v. Preczewski, a case that will decide whether public universities that infringe their students’ First Amendment right to free speech can be held accountable for it.

The case was brought by Chike Uzuegbunam, who was a student at Georgia Gwinnett College from 2013 to 2017. While there, he converted to Christianity, a decision that he said “brought me so much joy and purpose that I wanted to share my faith with as many people as possible.”

He tried to do that by having one-on-one conversations with students in a large plaza on campus where many other student groups and activists do the same.

Campus police told him he had to stop and move instead to a “free speech zone.” He did, but police quickly stopped him again, saying that his speech constituted “disorderly conduct,” which the college defined as any speech that causes students subjective discomfort.

The police threatened to prosecute Uzuegbunam if he continued, so he stopped.

He and another student in a similar situation sued the school for violating their First Amendment rights. They asked the court to enjoin Georgia Gwinnett’s restrictive speech code to prevent future harm, and they asked for nominal damages—$1—to vindicate the past violations of their rights.

Having received the school’s commitment that it would not prohibit free speech in the future, Uzuegbunam continued his claim for nominal damages to remedy the past violations of his rights.

The lower courts, however, ruled that a nominal damages claim alone can’t survive unless it is coupled with future relief or a larger amount of money damages. As a result, they dismissed his suit, leaving him without a remedy for the past violations of his First Amendment rights.

Uzuegbunam appealed, and the Supreme Court took his case.

At oral argument, the justices focused on whether nominal damages compensate a victim for a violation of his rights or amount only to a declaration that the victim was harmed. If the latter, then the justices seemed in agreement that granting a plaintiff only nominal damages amounted to an advisory opinion, which the Constitution forbids the courts from issuing.

Chief Justice John Roberts asked Uzuegbunam’s lawyer, Kristen Waggoner of the Alliance Defending Freedom, whether his claim “made a mockery” of Article 3 of the Constitution.

Waggoner argued that nominal damages are both a declaration that the victim has prevailed, but also compensation for difficult-to-quantify injuries.

Justice Neil Gorsuch suggested that a rule forbidding purely nominal damages claims would not bar many claims because “imaginative lawyers with imaginative damage theories” could surely come up with some amount of money damages in addition to nominal damages—even if it’s just the price of a bus ticket to campus.

Justice Elena Kagan also expressed this view, observing that lawyers are very capable of monetizing claims that are not readily quantifiable, like claims for emotional distress.

The justices had equally tough questions for Andrew Pinson, the solicitor general of Georgia.

Roberts and Justice Samuel Alito asked whether a suit could proceed if Congress passed a law that created a private right of action, but allowed only very small damage awards.

Pinson took the position that the amount didn’t really matter. What mattered, he contended, was whether the amount was meant to compensate the victim or just provide the courts with the ability to declare winners and losers in advisory opinions.

Kagan brought up a famous case in which singer Taylor Swift sued radio host David Mueller for sexual assault, asking for only $1. Swift didn’t want or need money; she wanted her injury vindicated.  Kagan asked, “Why isn’t that the same as this?”

Gorsuch noted that what the lower courts did in this case disadvantaged two groups of plaintiffs: (1) religious plaintiffs whose beliefs forbid them from seeking compensation; and (2) plaintiffs who can’t afford to hire imaginative lawyers and economists to put a dollar value on their intangible injuries. Aren’t nominal damages meant, he asked, to protect those groups?

Justice Amy Coney Barrett cited the Telephone Consumer Protection Statute, which provides damages for unwanted text messages. She asked Pinson if cases brought under those statutes would be constitutional if Congress reduced the statutory damages to $1.

He suggested that they would be constitutional, and Barrett responded: “So, you concede the damages for receiving a couple annoying texts, but not for having your First Amendment rights violated?”

Justice Brett Kavanaugh noted that until this case, every circuit court of appeals in the country permitted pure nominal damages claims, and that approach has worked. He noted that, for a variety of reasons, it has not created runaway litigation.

At the end of the arguments, it was not clear how the justices were leaning, but on balance Uzuegbunam has the better argument.

Some claims, especially discrete First Amendment violations, are truly impossible to quantify. What’s more, an attempt to put a dollar value on those rights can cheapen them. Is Uzuegbunam’s harm really only worth the value of a bus ticket to campus?

Nominal damages compensate victims of intangible harms with the intangible remedy of restored dignity. The court ought to recognize that and preserve the rule that all lower courts have followed until now.