Biden Says Trump Not Attending His Inauguration Is ‘a Good Thing’ 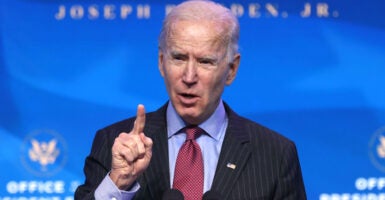 "It’s a good thing, him not showing up,” says President-elect Biden about President Trump not planning to attend his inauguration. Pictured:Biden delivers remarks on Jan. 8, 2021 in Wilmington, Delaware. (Photo: Chip Somodevilla/Getty Images)

“I was told that, on the way up here, way over here, that he indicated he wasn’t going to show up at the inauguration. One of the few things he and I have ever agreed on. It’s a good thing, him not showing up,” Biden said.

Trump tweeted Friday that he would not attend Biden’s inauguration, which is a separation from tradition. Vice President Mike Pence will likely attend the inauguration, three sources close to Pence said, according to Politico.

Hundreds of rioters descended on the U.S. Capitol building Wednesday amidst a march in opposition to the Electoral College’s certification of the presidential election results.

Biden reiterated his criticism that he believes Trump “is not fit to serve” and “he’s one of the most incompetent presidents in the history of the United States of America.”

“And so the idea that I think he shouldn’t be out of office yesterday is not the issue. The question is, what happens with 14 days left to go or 13 days left to go. And I think that what 81 million people stood up and said, it’s time for him to go. And the United States Senate voted 93-6 to confirm that we should be sworn in. We were, we were duly elected,” Biden said.

Biden said he believes his inauguration is the fastest way to ensure Trump’s departure, but added that it’s up to Congress to decide what to do before or post-inauguration.