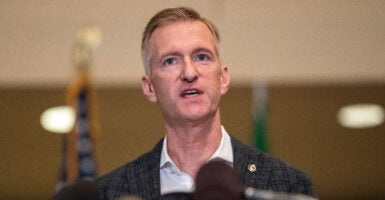 It took six months of rioting and millions of dollars in property damage for Ted Wheeler, the mayor of Portland, Oregon, to order increased law enforcement action against Antifa.

Several businesses were damaged during riots on New Year’s Eve, including two Starbucks shops, a Chase Bank, a Pandora Jewelers, a Ben Bridge Jewelers, and many local businesses, such as the Portland Wine Co. and an office space, according to the Portland Police Bureau.

The riots led to three arrests.

“My good-faith efforts at de-escalation have been met with ongoing violence and even scorn from radical Antifa and anarchists,” Wheeler said in a Jan. 1 press conference. “In response, it will be necessary to use additional tools and to push the limits of the tools we already have to bring the criminal destruction and violence to an end.”

But the Thursday incident was just the latest destructive event in Portland.

From May 29 through Nov. 15, authorities declared 30 riots across the city, resulting in 960 arrests, according to officials. At least 58 instances of vandalism were reported and about 62 fires were set in association with the recorded protests and riots.

Several small businesses and places of worship were damaged in downtown Portland in just one Nov. 4 incident, according to the Portland Business Alliance.

“I find it beyond comprehension that anyone would continue to think that the destruction of our small businesses in downtown Portland is somehow acceptable or represents the exercise of free speech. These destructive acts of political violence must stop now,” Portland Business Alliance President and CEO Andrew Hoan said in a formal statement.

“I hope every elected official will react and denounce this reprehensible behavior, just as vehemently as when our beloved Oregon Historical Society was attacked,” Hoan added.

“The violence must stop,” Oregon Gov. Kate Brown, like Wheeler a Democrat, said in a formal statement Sept. 3. “There is no place for white supremacy or vigilantism in Oregon. All who perpetrate violent crimes must be held equally accountable.”

Brown’s statement was signed by Wheeler and several other politicians, as well as 19 Portland business and community leaders.

Downtown Portland lost $18 million in revenue and faced $4 million in property damage during the first month of rioting alone, according to a survey conducted by the Portland Business Alliance, KGW-TV, Portland’s NBC affiliate, reported.

Hofberg said that windows and showcases were broken by looters, who stole watches and jewelry.

“Oftentimes people say, ‘Is the insurance going to cover this?’ Insurance companies don’t come to you the day after and hand you a check,” Houranpay said.

The first weekend after George Floyd’s May 25 death in the custody of Minneapolis police, the Portland Business Alliance announced that it opposed systemic racism but disagreed with acts of violence and looting.

“What happened hours later, in the middle of the night, is simply anarchy. We reject and condemn those involved with the looting and wanton destruction on the streets of Portland from Martin Luther King Jr. Boulevard through the heart of our city,” the business alliance said in a May 30 statement.

“The rioting that occurred has left us all devastated,” the alliance added, asking the city to activate the National Guard if looters returned.

The National Guard was not activated to respond to civil unrest until Brown approved the deployment Nov. 4, The Daily Caller News Foundation reported.

Hundreds of community members gathered to “sweep up truckloads of broken glass” and remove “miles of graffiti,” according to the Portland Business Alliance. “All told, businesses and our community will suffer the loss and or damage of tens of millions of dollars. And even more employees now will go without wages.”

The Portland Police Bureau did not have a report available of the number of businesses that sustained damages during demonstrations and rioting.

Downtown Portland Clean & Safe and the Portland Business Alliance did not respond to The Daily Caller News Foundation’s request for comment.