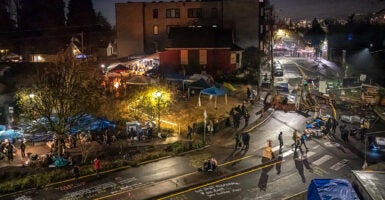 Protesters walk through an area near the Red House on Mississippi Street blockaded against a police response Dec. 9, 2020, in Portland, Oregon. Police and protesters clashed during an attempted eviction, leading protesters to establish a barricade around the Red House. (Photo: Nathan Howard/ Stringer/Getty Images)

Portland’s autonomous zone, which is moving into its third day, has been “stockpiling weapons” and has instituted armed patrols to defend the walled-in city occupation, authorities said.

Since the encampment began, rioters have increased fortifications around city streets, assaulted residents, and law enforcement has noticed the presence of “armed sentries” patrolling intersections, according to a press release from the Portland Police Bureau.

The autonomous zone, which has been dubbed “Red House on Mississippi,” formed after city officials attempted to enforce a home foreclosure on the Kinneys, a black and Indigenous family, The Oregonian reported.

“We want a peaceful and safe resolution to the occupation of public space on North Mississippi Avenue,” Portland Police Bureau Chief Chuck Lovell said in the release. “We are greatly concerned about the fortification of barricades, stockpiling of weapons, armed sentries, attacks on journalists and threats to kill officers in graffiti in this public space.”

“Our goal is for this to resolve peacefully to increase safety for all involved. I encourage those involved to reach out to our Demonstration Liaison Officers so we can discuss a peaceful outcome.”

Here are the barricades along Skidmore at the Red House zone in Portland pic.twitter.com/JfaNau3GkS

The department also indicated that traffic in addition to emergency services are being stalled by the blockade, and residents within the walls have been trapped by the vigilante group.

The encampment began after law enforcement attempted to secure the Kinney home for the new owner, but police quickly vacated the area after violent demonstrators forced them out, according to The Oregonian.

The Kinneys’ son, who pleaded guilty to a 2002 felony hit-and-run that killed an 83-year-old man, crippled the family financially and led to the foreclosure, the local outlet reported.

Two members of the Kinney family were arrested for trespassing during the Portland Police Bureau’s initial visit, according to The Oregonian.

“I am authorizing the Portland Police to use all lawful means to end the illegal occupation on North Mississippi Avenue and to hold those violating our community’s laws accountable,” Democratic Portland Mayor Ted Wheeler wrote in a Tuesday tweet. “There will be no autonomous zone in Portland.”

Wheeler authorized “all lawful means,” but the mayor continues to implement his September ban on tear gas for the city police department, a spokesman told The Daily Caller News Foundation in a separate report.

“Portland Police do not want a confrontation, but will act to enforce the law and use of force if necessary to clear this private and public land,” the Portland Police Bureau wrote in the release.

This report has been updated since first published. Content created by The Daily Caller News Foundation is available without charge to any eligible news publisher that can provide a large audience. For licensing opportunities for this original content, email [email protected].