Portland Mayor Wheeler’s Tough Talk on Lawlessness Is Too Little, Too Late 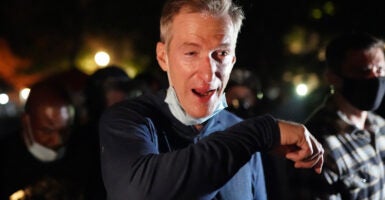 Portland, Oregon, Mayor Ted Wheeler reacts after being exposed to tear gas fired by federal officers while attending a July 22 protest against police brutality and racial injustice in Portland. Wheeler's participation failed to win him favor from the protesters. (Photo: Nathan Howard/Getty Images)

Ted Wheeler, the mayor of Portland, Oregon, is discovering the hard way that even virtue signaling has diminishing returns.

So, no, prattling on about how much “our nation’s systems and structures are fundamentally racist and require significant reform” will not allow you to finally protect your city from marauding mobs, if the vandals themselves see through your self-serving language.

The mayor is late on protecting Portland. Through most of 2020’s “Summer of Hate,” he refused federal help to defend his constituents from looting and riots by Antifa and Black Lives Matter activists.

The first duty of government is to protect the liberties of the people, and by that standard, Wheeler abdicated his responsibility long ago.

The elections are now over, however, and Wheeler has decided to authorize the Portland police to use “all lawful means to end the illegal occupation on North Mississippi Avenue and to hold those violating our community’s laws accountable,” something he announced in a tweet.

That’s a reference to demonstrators who have set up camp around a house at that location. The family who lives there lost it to foreclosure two years ago, but has refused to leave despite efforts to evict them, and the protesters say they are protecting the family.

Of course, this being Portland, those demonstrators have “shut down Mississippi Avenue and have thrown rocks, bottles, and balloons at anyone with a badge,” as reported by KGW-TV, the NBC affiliate there.

In the cable TV series “Portlandia,” the city’s inveterate progressivism came off as quirky, funky, and harmless. In real-life Portland, however, Marxists and anarchists inflict violence on humans and property.

Suddenly filled with resolve, Wheeler said in a tweet Tuesday: “There will be no autonomous zone in Portland.”

It was then, to soften his new assertiveness, that he wrote those words about the systemic and structural racism that supposedly afflict America.

The protesters and the left were having none of it. On Twitter, Wheeler received a raft of woke invective, and in the nonvirtual world, things went even worse.

By Wednesday, one day after Wheeler’s tough hombre talk, the demonstrators had “stockpiled homemade shields and other defensive gear, piled up rocks and bricks, and laid down homemade spike strips to puncture the tires of any vehicles that could breach the barricades,” according to The Oregonian.

What Wheeler hasn’t understood is that telling people that America is a horrible, warped place, morally broken because of its supposed inbred racism is not likely to be conducive to get the demonstrators to go home.

That sort of language is borrowed and nurtured by critical race theory—at heart, a Marxist set of ideas—as Jonathan Butcher and I explained in a paper published this week.

It’s nonsensical. Structures and systems don’t have souls or brains, so they can’t commit the sin of racism; only people can. Moreover, the use of such concepts is intended precisely to incite revolution.

“It is our hope that scholarly resistance will lay the groundwork for wide-scale resistance. We believe that standards and institutions created by and fortifying white power ought to be resisted,” Butcher and I quoted the late law professor Derrick Bell, the architect of critical race theory, as having written.

And that resistance is what Wheeler is discovering now.