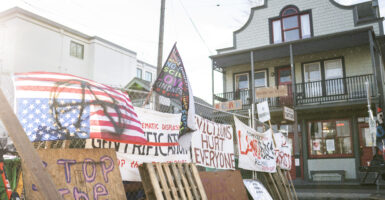 The dayslong autonomous zone reportedly reached an agreement with the city of Portland following an apology from the mayor and street barricades are being removed.

The armed encampment, dubbed “Red House on Mississippi,” has persisted for the last week and has erected roadblocks around the family home of the Kinneys, who are black and Indigenous, after they faced foreclosure from local authorities, according to Fox News.

The group gained national attention after it clashed with police following a dozen arrests and drove law enforcement away from the home, Fox reported.

The makeshift walls of the anti-eviction zone, which were built following the raid, were lined with the phrases “Land Back,” “Eat The Rich,” and “ACAB,” according to Fox.

“The barricades are coming down, Ted Wheeler has apologized, and Portland Police has promised not to attack supporters,” the group’s twitter account wrote on Sunday.

Our work is not going unseen! The mayor has promised the Kinney family that they will not raid Red House as long as the barricades are taken down by Monday night. pic.twitter.com/12FmRdT0Bz

Both Democratic Portland Mayor Ted Wheeler and Police Chief Chuck Lovell issued an apology to the Kinneys after the family was reportedly the subject of threats from a frustrated public, The Oregonian reported.

“We apologize and understand that following our tweets earlier this week that your family received threats,” a letter from the pair read, according to the local outlet. “We did not intend to attract attention that results in threats of harm and violence to your family or that escalated tensions in our community.”

“Nobody should be subjected to this kind of stress and harm, and we apologize for the role our tweets played in this.”

Wheeler previously authorized law enforcement to use “all lawful means” to disband the autonomous zone.

“I am authorizing the Portland Police to use all lawful means to end the illegal occupation on North Mississippi Avenue and to hold those violating our community’s laws accountable,” Wheeler wrote in a Tuesday tweet. “There will be no autonomous zone in Portland.”

Lovell issued a warning to demonstrators to “put down” their “weapons” after the chief acknowledged the group was stockpiling guns and threatening community members.

“Those present at the barricades should leave it behind, put down your weapons and allow the neighborhood to return to peace and order,” Lovell said Wednesday. “We are aware of the stockpile of weapons and the presence of firearms. We are aware of the threats to the community, to media, to police—we’ve seen the attacks.”

I wanted to say a few words to each of you about activity along North Mississippi. pic.twitter.com/Icq4mpzTAL