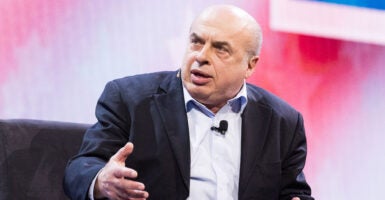 They were called “refuseniks”—Jews in the Soviet Union who wanted to emigrate.

They were not just “refused” the right to leave. They were spied on, harassed, and thrown into prison.

For Natan Sharansky, the unimaginable abuse was a liberation of conscience. They could take away everything but his passion for freedom. The resilience he showed in the face of mistreatment and humiliation was also the foundation of a lifetime of service as a global statesman and humanitarian.

That journey and the wisdom gathered along the way are the subjects of a new book by Sharansky, 72, and American historian Gil Troy, “Never Alone: Prison, Politics and My People.”

In many ways, “Never Alone” could serve as a user’s guide to protecting human rights in an era of great power competition and in particular to dealing with the unpardonable global scourge of anti-Semitism.

“Never Alone” is a story in three parts.

The first deals with Sharansky’s transformation from a youth marching in victory parades glorifying the Soviet state to a hard-line dissident, who, after spending nine years in prison, was allowed to emigrate to Israel in 1986.

In part two, Sharansky spent decades as an advocate for the “Aliyah,” the Jewish diaspora from around the world immigrating to Israel and integrating into Israeli society, and as an Israeli politician holding several critical Cabinet posts.

The third section of the book deals with Sharansky’s global leadership, engaging the Jewish community around the world in combating anti-Semitism and efforts to delegitimize Israel.

The book engages on many levels beyond the story of his personal experience and the Jewish experience. In particular, there are insights for safeguarding freedom in the era of great power competition.

For starters, a peaceful and prosperous Middle East, independent of the undue influence of external adversarial powers is foundational to global stability.

Sharansky was an unrepentant skeptic of dealing with the Palestinian authorities, who reminded him of the corrupt thugs who governed in Moscow with no real concern for the well-being and freedoms of their own people.

Efforts at peacemaking with vicious dictators who have no interest in peace don’t deliver peace. Pressing forward on normalization of relations between Israelis and Araba is the only practical path forward.

Sharansky also targets the other real threat to delivering a real future to the region.

“The regime in Iran is obsessed with fighting America and destroying Israel,” he points out. That’s a reality that any future U.S. administration dealing with Iran should never forget. Unleashing Iran on the rest of the region is the very last step any U.S. president should make.

“Never Alone” also has a lot to say about the importance of the continued advocacy for human rights in an age of competing powers. After all, the real difference between countries like the U.S. and Israel, on the one hand, and China, Iran, and Russia, on the other, is that the free world believes in human rights, freely elected governments, and free enterprise. The other side does not.

Sharansky rightly argues the free world can do better. “[President Barack] Obama kept disappointing those of us around the world who expect the American president to be champion of human rights,” he writes.

To be fair, he also has some harsh words for President Donald Trump. While Trump’s administration was strong on many human rights issues (such as human trafficking and persecution of the Uighurs) and he could offer eloquent defenses of freedom (such as his 2017 Warsaw speech), human rights rhetoric was not a hallmark of his presidency.

While there’s a lot of Trump policy that points to how to protect freedom in the modern world, Sharansky is right: America’s voice on human rights needs to be unambiguous and incessant.

“Never Alone” also argues that the world needs to pay more attention to battling anti-Semitism. This is not just about protecting Jews. Anti-Semitism is a “gateway drug” to destroying human rights. The instruments used to marginalize Israel could be, and have been, turned on the rights of others as well.

“The pro-Palestinian postmodern attack against Israel came under the banner of human rights,” Sharansky warns. The attacks on human rights today are Orwellian efforts of inversion that are trying to limit human freedom by pretending to safeguard them. In turn, the defense of the global Jewish community offers a blueprint for how to protect all our freedoms.

It’s time to take on the perversion of attacking Israel as part of the problem. Doing so would be exemplary of the solution.