Trump’s Executive Order Against Anti-Semitism Will Protect US Jews 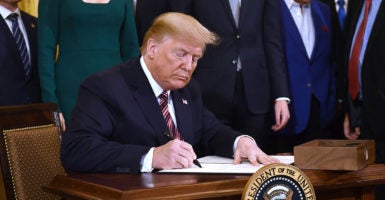 President Donald Trump signed an executive order on Dec. 11 to further the fight against the rise of anti-Semitism in the U.S. (Photo: Brendan Smialowski/AFP via Getty Images)

The administration also recognized that anti-Zionism is a contemporary manifestation of anti-Semitism. Although hate speech is protected under the Constitution, the anti-Semitism infesting many college campuses goes far beyond the exercise of First Amendment freedom.

Make no mistake: Anti-Semitism in schools and on college campuses—from fellow students, outside agitators, and even faculty—is a growing problem.

The Anti-Defamation League reports anti-Semitic incidents jumped 48% from 2016 to 2018. Nearly 30% of these ugly events occurred on college campuses or at non-Jewish schools. Jewish students welcome this partial solution from the Trump administration to this evil.

Just last month, Students for Justice in Palestine led a prolonged interruption of a Vassar College event focused on the indigenous Jews of the Middle East—lambasting the audience with an overtly anti-Semitic chant. Similar incidents have occurred across the nation.

Many universities fail to prevent or respond properly to non-constitutionally protected anti-Semitic activity. Some universities have even furthered the cause of the anti-Semitic Boycott, Divestment, and Sanctions (BDS) movement, which boycotts Israeli investments or businesses. This echoes the boycotts of Jewish businesses throughout the Third Reich.

Much misinformation persists regarding the executive order.

The New York Times claimed the order would classify Judaism (the Jewish faith) as a nationality. Yet the executive order’s text merely states what should be obvious: “[I]ndividuals who face discrimination on the basis of race, color, or national origin do not lose protection under Title VI for also being a member of a group that shares common religious practices.”

This closely mirrors existing guidance from the Office for Civil Rights. In other words, harassing someone perceived to be of the Jewish race due to her practice of the Jewish faith is an act of anti-Semitism.

Despite claims to the contrary, the executive order does not—and should not—ban “hate speech.” Such a ban would violate the First Amendment and complicate the already challenging debates over free speech on campus.

Furthermore, even if such a ban on hate speech were constitutional, any ban would result in government suppression of speech. Harassment is a form of discrimination included in existing guidance from the Office of Civil Rights in the Department of Education. It is important that definitions of “harassment” not include constitutionally protected speech.

Although individuals have the right to counter hate speech, the government may not ban such speech. The danger exists that some institutions may misapply this guidance and violate expressive rights.

If history is any guide, the danger definitely exists that some campus officials may make speech codes mischief with this guidance. We must be alert for any such violation of free speech rights. However, nothing in the clear language of the executive order blocks anti-Semites from continuing their bigoted, hateful (but constitutionally protected) speech.

Another misconception is that the order equates criticism of Israel with anti-Semitism. It does no such thing. This myth stems from the administration’s instruction to rely on examples provided by the International Holocaust Remembrance Alliance in identifying contemporary anti-Semitism. The examples simply show how anti-Semitism cloaks itself in the language of anti-Zionism.

In fact, many of the examples given (such as “calling for, aiding, or justifying the killing or harming of Jews in the name of a radical ideology or an extremist view of religion”) don’t mention Israel at all.

The International Holocaust Remembrance Alliance does point out that the following rhetoric—“taking into account the overall context”—relating directly to Israel are manifestations of contemporary anti-Semitism:

Of important note, the executive order is not an attempt to ban any of this rhetoric. As discussed previously, hate speech is protected by the First Amendment of the Constitution.

However, using the rhetoric of an individual to determine whether her non-speech-related conduct is anti-Semitic in nature can be incredibly helpful. Administrators should be careful to distinguish between constitutionally permitted codes of student conduct vs. speech codes that unconstitutionally restrict free speech.

These examples of anti-Semitic rhetoric masquerading as anti-Zionism should serve only to identify the anti-Semitic nature of other conduct not related to free speech.

Perhaps the International Holocaust Remembrance Alliance’s list of examples are too precise for an executive order. However, the use of examples in this context helps administrators to identify instances of anti-Semitism in the form of anti-Zionism.

It was important for authorities to understand that what might appear to be a political activity, simply because it references Israel or Zionists, shouldn’t be thought of as that and taken at face value. … If you have a responsibility to monitor, to address the problem of antisemitism, whether it’s on college campuses or in the streets of Stockholm, then having a definition like this one is a helpful tool.

Anti-Semites indeed do compare the world’s only Jewish nation to the Nazi regime, singling Israel out for alleged human rights violations while largely ignoring the very real plight of religious, ethnic, and political minorities in places such as Cuba, China, and Turkey.

Israel protects the rights of religious and ethnic minorities. All Israeli citizens have the right to vote, access to public health care, public education, freedom of speech, freedom of religion, and property rights. Arabs serve in the Israeli parliament and in the Israeli Defense Forces.

Lastly, denying the very right of an entire people to even have their own nation-state is far different than criticizing the government of a nation. Yet many anti-Semites support the right of self-determination for countless others while opposing the right of the Jewish people to have a nation of their own in their ancestral homeland.

Jewish students must also be accorded the same civil rights protection as every other racial and ethnic group—no more and no more less. When anti-Semitic activity breaches the bounds of free speech, universities must comply with their obligations under the Civil Rights Act.