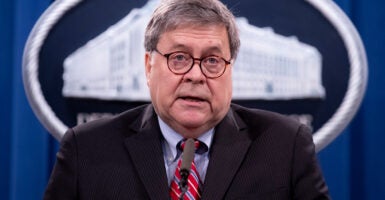 Attorney General William Barr will leave office Wednesday the same way he came in—as a class act. He carried out his role as the consummate professional who followed the law, administered justice, and forged ahead—despite relentlessly unfair and unjustified criticism leveled at him.

Barr offered a refreshing contrast to President Barack Obama’s former attorney general, Eric Holder, who characterized himself as Obama’s wingman. Barr understands that his first loyalty is to the Constitution and the rule of law, not the president. He knows that the attorney general must be an objective, apolitical enforcer of our nation’s laws.

Barr certainly cannot be characterized as the president’s wingman. Consider the anger expressed from the right over the fact that Barr kept the investigation of former Vice President Joe Biden’s son Hunter Biden secret until after the November election.

Barr has conducted himself as an ethical professional, adhering to the longstanding rules inside the Justice Department that require maintaining the confidentiality of criminal investigations to avoid damaging the lives and reputations of individuals over unproven claims and charges, as well as not harming the ability to conduct thorough criminal investigations.

Many conservatives criticized other actions taken by Barr, such as his support for FBI Director Christopher Wray and his statement that he had not seen evidence of widespread voter fraud sufficient enough to change the outcome of last month’s presidential election.

Whether one agrees or disagrees with such statements, Barr obviously called them like he saw them, and certainly was not kowtowing to the president or anyone else.

Barr, who previously served as attorney general under President George H.W. Bush, spent a lot of time trying to bring the Justice Department back in line as an objective executive agency divorced from politics, where prosecution decisions are driven by the best interests of justice.

As he stated in his resignation letter, Barr did not want FBI agents and Justice Department prosecutors to get away with targeting the presidential campaign of the opposition political party “with frenzied and baseless accusations of collusion with Russia.”

Barr’s willingness to appoint U.S. Attorney John Durham as a special counsel to investigate the origins of the Trump-Russia “collusion” probe—regardless of the fact that this could end with the prosecution of federal agents and lawyers—demonstrates his priority of maintaining and repairing the ethics and professionalism of the Justice Department as an institution.

It’s important to note that Barr didn’t change a single decision by special counsel Robert Mueller in his investigation of alleged ties between the 2016 Trump campaign and Russia. Nor did Barr try to withhold Mueller’s report or prevent him from testifying before Congress.

In fact, Barr worked with Mueller’s team on issues related to the redaction of sensitive information from the Mueller report, so that the public could see as much of the report as possible. This demonstrated Barr’s interest in transparency and his refusal to allow politics and the desires of some to have him censor and otherwise limit that investigation.

Barr’s willingness to reveal the misconduct of government officials involved in the prosecution of former Trump national security adviser Michael Flynn also demonstrated how Barr is determined to do the right thing, not the politically correct thing.

President Donald Trump went on to pardon Flynn and reverse a miscarriage of justice against the retired Army lieutenant general, despite fierce criticism from the media and others.

Under Barr’s leadership, the Justice Department fulfilled its obligations to enforce federal immigration law. This included filing the first-ever immigration fraud prosecutions of individuals involved in the birth-tourism industry, a multimillion-dollar criminal industry that existed for decades but was ignored by prior administrations.

Barr also worked to reverse some actions of the Obama administration, which tried its best to terminate all cooperation that local authorities were giving to federal authorities to enforce our immigration laws.

Similarly, many colleges and universities—particularly Ivy League schools—have been violating civil rights law for years with impunity by discriminating on the basis of race in their admissions practices.

Prior administrations ignored this. But under Barr, the Justice Department’s Civil Rights Division finally started investigating these violations of federal law, suing Yale University in October and conducting an investigation of Harvard University.

On top of all this, the Barr Justice Department has done everything it can to help our beleaguered state and local law enforcement agencies. This included opening up multiple investigations of the violent rioters who attacked law enforcement officers—something that many local prosecutors were ignoring (often at the direction of their mayors).

The Latin motto of the Justice Department is “Qui Pro Domina Justitia Sequitur.” Roughly translated, this means he who “prosecutes on behalf of justice.”

Unlike some prior attorneys general who seemed to believe that this motto means he who “prosecutes on behalf of his political and ideological allies,” William Barr successfully carried out his solemn obligation to prosecute on behalf of justice in a professional, ethical, objective, and nonpartisan manner.

We can only hope this continues with the next attorney general.