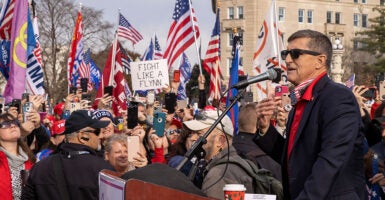 Michael Flynn, seen here speaking at a protest of the outcome of the 2020 presidential election outside the Supreme Court on Dec. 12, was spared by a presidential pardon from what some say was further persecution by a federal judge. (Photo: Tasos Katopodis/Getty Images)

Federal Judge Emmet G. Sullivan last week finally got around to doing what he should have done months ago.

Sullivan officially dismissed the Justice Department’s case against Michael Flynn, but only after President Donald Trump had pardoned him the day before Thanksgiving.

In fact, Sullivan’s obstreperous behavior in this case has been unpardonable.

It’s been almost a year since Flynn first asked to withdraw his guilty plea and more than seven months since the government itself moved to dismiss the charges against him because, as Sullivan noted, the Justice Department said:

(1) Mr. Flynn’s false statements to the FBI agents were not ‘material’ to any investigation; (2) the government is doubtful that it could prove the falsity of Mr. Flynn’s statements; and (3) the government has ‘no substantial federal interest in penalizing a defendant for a crime that it is not satisfied occurred and that it does not believe it can prove beyond a reasonable doubt.’

So, why did it take this long for Sullivan to dismiss a prosecution that the parties agree never should have been brought in the first place?

Well, he took the extremely unusual step of appointing a retired federal judge, John Gleeson, as a “friend of court”—just a few days after Gleeson wrote a harsh polemic against Flynn in The Washington Post. Sullivan tasked him with investigating whether he should agree to the dismissal and whether Flynn should potentially be charged with perjury in connection with initially having entered a guilty plea.

The implications of Sullivan’s moves were staggering.

Moreover, it’s been three and a half months since the U.S. Court of Appeals for the D.C. Circuit, sitting en banc, gave Sullivan a face-saving “out” to continue handling the case, overruling a panel decision that had ordered him to immediately dismiss the case.

The en banc court gently prodded him to resolve the issues quickly, saying, “we trust and expect the District Court to proceed with appropriate dispatch.”

Unfortunately, he did nothing of the sort, demonstrating that the “trust” of the appellate court was misplaced. Given Sullivan’s questionable conduct throughout the case, it should have known better.

And now, it appears he’s only dismissed the case because Trump’s pardon made it moot. As one news outlet blared, in a headline that illustrated Sullivan’s appearance of partisan bias, “Judge takes final shots at Trump, Flynn as he agrees to dismiss case.”

Let’s be clear here. At this point, Sullivan didn’t have a choice. And troublingly, he tried to tilt the scale in his favor on unresolved issues surrounding the scope of a federal judge’s authority when both the government and the defendant agree that criminal charges should be dismissed.

Of course, he asserted, the “Court Has Discretion to Review the Unopposed Rule 48(a) Motion [to Dismiss],” and to review it for either “Deficient Reasoning Or Prosecutorial Abuse.”

In fact, he goes on to say that “while not conclusory, many of the government’s reasons for why it has decided to reverse course and seek dismissal in this case appear pretextual, particularly in view of the surrounding circumstances.”

Contrary to that assertion, though, it’s those “surrounding circumstances”—such as the FBI’s ambush interview, the FBI’s failure to follow standard protocols, and the FBI and Justice Department’s failure to turn over potentially exculpatory or impeaching evidence, among other things—that no doubt played a part in the Justice Department’s decision to no longer pursue charges against Flynn.

Sullivan wants to simply ignore all of this troubling conduct by federal agents and prosecutors.

Instead, he said, “the Court finds . . . [the Justice Department’s stated rationales as to why it believed it could not prove the charges beyond a reasonable doubt] dubious to say the least, arguably overcoming the strong presumption of regularity that usually attaches to prosecutorial decisions.”

So, just to be clear, Sullivan implies that he thinks he could unilaterally require the government to move forward with a prosecution when it no longer believes it can prove the case or when it believes the interests of justice require a dismissal.

Imagine if that standard were applied regularly or in any other criminal case. There would, rightly, be an outcry.

Sullivan seems to be confused about what country it is where he’s a judge.  For example, in France and Spain, judges act as both judges and the government prosecutor. That, wisely, is not the case here, where the Constitution’s doctrine of separation of powers divides those responsibilities between the judicial and executive branches.

In a final political potshot at both Trump and Flynn that has no place in a legal opinion, Sullivan said, “President Trump’s decision to pardon Mr. Flynn is a political decision, not a legal one. Because the law recognizes the President’s power to pardon, the appropriate course is to dismiss this case as moot.

“However, the pardon ‘does not, standing alone, render [Mr. Flynn] innocent of the alleged violation.’”

No, but the government saying it had no case and that it could not actually prove that Flynn had violated any law certainly means he is “not guilty” in the eyes of law.

And for Sullivan, that’s what should count.

What’s even more clear is that the law does not, and never has, rendered Sullivan a sovereign entity, capable of writing the law, prosecuting those who violate the law, and passing judgment on those alleged violations.

Ours is a nation of checks and balances. And fortunately, Trump used his pardon power to check a judge who was out of control and to deliver long-overdue justice to Flynn.