China Lies About Its Wrongdoing on COVID, Spying, Global Aggression, Pollution, and More 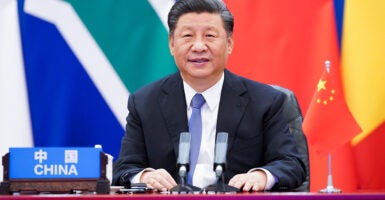 The Chinese Communist Party has lied about COVID-19 from the start. And it’s still lying about the disease that has turned into a pandemic confirmed to be responsible for nearly 75 million infections around the world, including 17.2 million in the U.S.

The global death toll from the pandemic is over 1.6 million, including more than 310,000 in the U.S.

Beijing’s malignant behavior doesn’t stop with the pandemic, of course. Just this month we’ve learned of Chinese spies trying to seduce U.S. lawmakers and other politicians. And we’ve learned of other Chinese Communist Party members who have infiltrated a host of U.S. universities and businesses.

Naturally, the Chinese regime denies it all. Its dogged addiction to lying in the face of clear-cut facts is a worrisome indicator that the Beijing we must deal with now and into the future is even more duplicitous and aggressive than the Beijing of the past.

The regime’s mendaciousness about COVID-19 began when it underreported the size of the initial outbreak in China. Then the Communist government tried to hide how contagious the disease was, even denying it could be transmitted by human-to-human contact.

The Chinese also allowed international travel to continue, knowing it was likely exporting a global outbreak.

The Chinese are still lying, trying to pin the origin of COVID-19 seemingly anywhere other than Wuhan in their own country—the actual place where the disease first appeared.

Chinese officials suggested in March that COVID-19 originated in, you guessed it, the U.S. Last month, they pointed fingers at India. Last week, they were blaming Italy.

The evidence for this latest claim? An Italian study that found cases in that country earlier than expected. The report’s authors, however, quickly debunked Beijing’s self-exonerating interpretation.

“These findings simply document that the epidemic in China was not detected in time,” Giovanni Apolone, scientific director of Italy’s National Cancer Institute and a co-author of the study, told a news conference in Milan.

China’s outrageous conduct during the pandemic goes beyond mere lying and negligence. It also has bullied and threatened other nations.

At one point a Chinese official threatened to withhold medical supplies and personal protective equipment from the U.S. market. China also received criticism for exporting defective and substandard medical equipment.

Beijing’s continued aberrant behavior can lead to only one conclusion. The regime doesn’t believe honesty is the best policy. Rather, its preferred policy seems to be deceit and aggression.

Recently more news came to light of efforts by Chinese intelligence to infiltrate and influence government, including most famously the office of Rep. Eric Swalwell, D-Calif.

And last week, a cache of leaked documents revealed Chinese Communist Party members are in positions of power and influence all over the world.

On the aggression front: Last week, pro-democracy dissidents in Hong Kong received harsh prison sentences under the sweeping “national security” law recently imposed by Beijing. The regime has also doubled down on its repression of the Uighur minority group with human rights abuses that many feel rise to the level of genocide.

As for bald-face deceit, the Chinese leader recently told the United Nations General Assembly that his country was leading the world in responding to climate concerns and protecting the planet.

In fact, China is the world’s leading polluter. It spews more greenhouse gases than any other nation, and its pollution is getting worse—not better.

Most of the 1.3 billion tons of plastics that are dumped into the oceans each year come from China. Many of Asia’s challenges in getting sufficient freshwater can be traced back to Chinese mismanagement.

China has not taken one step in statecraft that suggests the regime is interested in being a more responsible international partner.

There is a lesson to be learned here. For eight years President Barack Obama’s administration tried persistently to “reset” relations with Russia and consistently failed. There was a reason for that. Détente requires a partner that is willing to drop the aggressive behavior that caused problems to begin with.

Russian President Vladimir Putin was never that partner, and Chinese President Xi Jinping is cut from the same mold.

There is zero evidence we are going to get a better Beijing anytime soon. It is the height of irresponsibility to believe that going easy on the Chinese communist regime will produce anything other than more deceit and aggression and more disappointment for the free world.