How the UK and US Can Stand Up to China Together 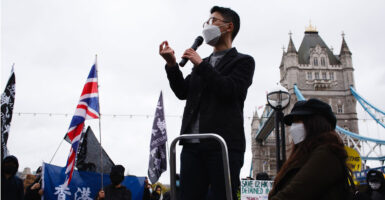 The United Kingdom can play an important role in building a coalition of Western nations that stands up to China. Pictured: Pro-democracy activist Nathan Law, who has self-exiled from Hong Kong out of concerns for his safety, addresses a "Save 12 HK Youths" rally at Potters Fields Park beside Tower Bridge in London, England, on Oct. 24. (Photo: David Cliff/NurPhoto via Getty Images)

Even though he was removed from 21st-century geopolitics by two centuries, the French leader Napoleon Bonaparte prophetically foretold  of modern China’s rise on the world stage with his clairvoyant observation, “Let China sleep! For when he wakes, he will shake the world.”

In the aftermath of the giant’s awakening, an ineffectual and befuddled West has continued its ambivalent stance toward China—a fact not lost on the Chinese government and one that it will decisively take advantage of.

A post-Brexit United Kingdom, as a great power with historic and cultural ties to a few regions lately victimized by Chinese aggression, is uniquely placed to play a leading role in the new cold war with China.

As an important player in the affairs of the European continent, with an independent streak that often aligns with American interests, the U.K. can bridge the gap between the U.S. and the rest of the West in regard to the proper approach to take toward China.

While British Prime Minister Boris Johnson’s administration has recognized the specific nature of the Chinese threat and has taken some initial, appropriate first steps, the British government should adopt a far more aggressive stance toward China than its present one, and it should organize a coalition of democracies to similarly confront China.

After undertaking years of failed détente and appeasement with the Chinese government, Britain, America, and its allies must collectively implement a more consistent, vigorous, and hawkish foreign policy toward China with the clear message that its aggressive posturing within and beyond its mainland will no longer be tolerated.

Having defeated the evils of Nazi fascism during World War II and of Soviet communism during the Cold War, a united Anglo-American front would prove vital in staving off Chinese aggression. However, for such an approach to work, the U.K. must first curb China’s growing influence within its borders.

A report from the Royal United Service Institute identified that Britain remains vulnerable to Chinese interference in nearly every aspect of the British economy. Under pressure from America and Conservative backbenchers in Parliament, the Johnson government reneged on a business deal with the Chinese technology company Huawei. This was a good step, but it must do more to remove Chinese influence from the British economy.

Some observers object that Chinese investment in the U.K. economy is too deeply entrenched and deep-rooted to be erased, but this is a troubling development in itself. China has been using infrastructure investment and debt diplomacy to influence the domestic affairs of other countries, and these methods could easily compromise Britain’s national security interests if left unchecked.

It may be the case that Chinese business ties to the British public and private sector are too intertwined to be fully removed, but some sort of effort must still be made to nullify the threat that they pose to British security.

Now that the U.K. is independent of European Union influence, it can also implement more punishing sanctions under the Magnitsky Act against China. To avoid the fallout of its potential extrication from its economic relationship with China, the U.K. should diversify its trading base and continue seeking free trade agreements and bilateral investment treaties with other countries, preferably ones with shared democratic values and institutions.

To replace the 5G mobile network promised by Huawei, the U.S. has indicated that it will build another 5G network and nuclear power stations, an offer that the British government would be wise to accept.

These measures would send a clear message to China that Britain will not condone its bribery and that its trust in China must be earned rather than bought.

A multilateral coalition of democracies under the helm of Anglo-American leadership would do much to undermine China’s growing influence in different regions of the world. From the Himalayas to the Caribbean, China continues to flex its muscles.

First and foremost, Britain should join the Quadrilateral Security Dialogue, a strategic partnership formed between the U.S., Australia, India, and Japan in response to Chinese aggression.

It should also prevail upon its NATO allies and member nations of the Commonwealth to take a stand against China. Some—such as France, Germany, and Canada—have already formed strategic partnerships to stem Chinese influence or have pledged to carefully monitor Chinese activity in the Indo-Pacific.

In fact, France, Germany, and the U.K. recently submitted a joint note to the United Nations challenging Chinese maritime claims in the South China Sea. This is a laudable first step, but a more hard power-oriented approach such as joint military exercises between these countries in East Asia would also prove fruitful in deterring Chinese aggression.

There may be some limitations to what a more coercive foreign policy toward China can actually achieve; many Commonwealth countries and European members of NATO are economically dependent upon the Chinese. As exemplified by Chinese support for Pakistan against India over the Kashmir issue, a few of them may even rely on China to counterbalance the ambitions of rival states.

Along with America, Britain can also provide moral support and military assistance to countries lately threatened by China. As the Chinese have been particularly active in the South China Sea and the Indo-Pacific, the U.K. must continue with its plans to dispatch a carrier to project its naval power in these waters. It should expand its military presence in Brunei and increase its arms exports to key regional allies.

Along with fulfilling its current promise to grant Hong Kong residents citizenship, the British government can also dispatch a diplomatic mission to Hong Kong to support the protesters there suffering under the yoke of Chinese suppression.

The U.K. and the U.S. can collectively call for separate international investigations into China’s mistreatment of its Uighur minority and its initial handling of the COVID-19 pandemic. Steps such as these, many of which may seem small, will incrementally provide the necessary groundwork for a much more united and far-reaching response by the West to Chinese aggression than any measure taken before.

Britain’s growing participation in and eventual leadership of a growing international coalition against Chinese belligerence would do much to deter China. It also would have the added benefit of strengthening Anglo-American ties and the U.K.’s ties to other nations beset by Chinese hostility.

Speaking as a frequent visitor to the Chinese mainland, my grandfather once noted to me that the Chinese were a traumatized people, haunted by past cruelties inflicted on them by their World War II Japanese enemies or even 19th-century Western imperialists. On the other hand, the Chinese government utilizes these historical insecurities as a crutch to excuse its own authoritarian high-handedness and oppressive nature.

China, perceiving itself as the center of civilization since the Middle Kingdom era, is possessed by a nostalgia for its glory days as an empire. Driven by a zero-sum game mentality, China will continually attempt to succeed at the rest of the world’s expense.

In an op-ed in the Wall Street Journal, President Ronald Reagan’s former chief speechwriter and my friend Anthony Dolan wrote that what authoritarian regimes fear most is “the publicly spoken truth about their moral absurdity.”

If the modern Anglo-American alliance, in the true spirit of the Reagan-Thatcher partnership or even the Churchill-Roosevelt one, is to prevail over China as it did with the Soviets or the Nazis, it must confront the Chinese government for what it truly is: a playground bully rather than the giant that it pretends to be.