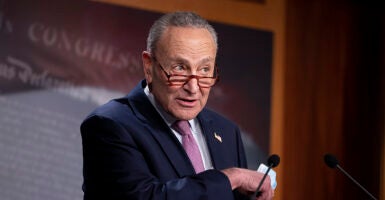 "Once we win the majority, God willing, everything is on the table,"  Senate Minority Leader Chuck Schumer, D-N.Y., says of eliminating the Senate filibuster. Pictured: Schumer holds a news conference at the U.S. Capitol Dec. 1. (Photo: Tasos Katopodis/Getty Images)

Most of what you’ve heard about the left’s extremist agenda is true. It hasn’t been exactly quiet about it.

The radical left, which is now setting the agenda for the incoming White House and at least one chamber of Congress, is intent on imposing a government takeover of the health care system, implementing the job-killing Green New Deal, and packing the Supreme Court. And that’s just for starters.

There is, however, one thing preventing the left from getting its way and fundamentally reshaping America: the Senate filibuster.

The filibuster is a central part of Senate tradition that’s been around for centuries. It’s a rule that ultimately requires 60 votes in order to pass legislation, and was designed to encourage moderation and counter the House of Representative’s majoritarian impulses.

Now, however, many on the left are openly calling to eliminate the filibuster so they can ram their partisan quasi-socialist agenda through Congress.

This agenda is extreme enough in itself, but what’s just as jarring about this push to change centuries of tradition is the hypocrisy of so many who once viewed the filibuster as sacred now calling to eliminate it—or refusing to rule out doing so.

In 2005 on the Senate floor, Biden railed against the possible death of the filibuster for judicial nominees, calling any effort to eliminate it “an example of the arrogance of power,” and a “fundamental power grab.”

While it’s true both parties have undone the filibuster for judicial and other executive appointments, starting with Democratic Sen. Harry Reid in 2013, the legislative filibuster has long been viewed as untouchable by both parties.

There’s an important reason for this. The Senate exists to check the rash and radical impulses of the majority, regardless of party, to prevent the “tyranny of the majority” our Founders rightly feared.

Eliminating the filibuster is far more than just changing some arcane procedural rule—it turns the Senate into another version of the House, where raw majorities rule, compromises are unnecessary, and the passions and prejudices of the moment often overcome reason and sound judgment.

In practice, it is nothing short of an assault on the rights of the millions of Americans represented by the Senate minority—an assault that will have devastating consequences for our republic and our system of constitutional norms, including our most fundamental rights.

Senate Minority Leader Chuck Schumer recently said of eliminating the filibuster, “Once we win the majority, God willing, everything is on the table.” That’s a scary proposition for any American not on board with the left’s definition of “everything.”

Extreme new gun control measures, massive tax hikes, and a new national government-run health care program (euphemistically termed a “public option”) are all on the table—and all would be possible if the filibuster is eliminated.

Instead of promising to blow up centuries of tradition, the left should focus on building consensus and crafting legislation that appeals to the broad spectrum of Americans.

That it’s more focused on the former should tell us everything we need to know about its plans to reshape the country.