Gov. Northam, It’s Not Up to You to Tell People of Faith How They Can Worship 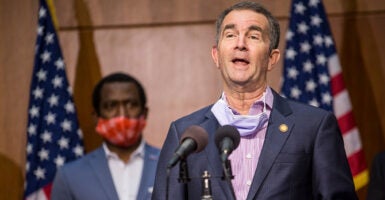 During a press conference Thursday, Gov. Ralph Northam, D-Va., took it upon himself to tell the faithful not only how they should worship, but also shamed them for wanting to worship with fellow believers. Pictured: Northam speaks during a news conference June 4, 2020, in Richmond, Virginia. (Photo: Zach Gibson/Getty Images)

During a press conference Thursday, Gov. Ralph Northam, D-Va., took it upon himself to tell the faithful not only how they should worship, but also shamed them for wanting to worship with fellow believers.

“The holidays are typically times of joy and community. We gather together, we celebrate our faith, and we celebrate with family,” Northam said during the press conference.

The Democrat governor of Virginia went on to say that people of faith don’t need to be in a church to worship God.

“But this year we need to think about what is truly the most important thing. Is it the worship or the building? For me, God is wherever you are. You don’t have to sit in the church pew for God to hear your prayers. Worship with a mask on is still worship,” he said. “Worship outside or worship online is still worship.”

Here’s the thing—it’s more than OK for Northam to share how he chooses to worship.

But, the governor of Virginia, or any other politician for that matter, has no business telling others how to worship.

If he wants to share how he chooses to worship, that is his right. But telling Christians how to worship—and then essentially shaming them from attending church—is wildly inappropriate.

Actually, one reason why the United States of America is even in existence is due to the very fact that people preferred not to be told how to worship.

One of the basic tenets of Christianity is worshiping in community—so stripping the ability of the faithful to do so essentially deprives Christians of the ability to practice their faith.

It’s ironic that the left, which bills itself as on the side of tolerance and acceptance, is now at a place where it is unabashedly telling Christians not to go to church, with politicians like Northam essentially having an executive fiat to say that people of faith “don’t have to sit in the church pew for God to hear your prayers.”

We’ve now come to a time in our nation’s history where we are told to be accepting of any race or sexual orientation people believe themselves to be, to be supportive and understanding and inclusive, but now it’s not OK to be accepting of the faithful who want to safely gather as a body and worship God?

As a reminder, this isn’t the first assault we have seen on churches in the time of the coronavirus.

In California, Godspeak Calvary Chapel Pastor Rob McCoy reportedly turned his church into a strip club so that it could stay open, engaging in a clean version of a striptease before taking off his tie—to which congregants reportedly held up $1 bills.

In New York, Gov. Andrew Cuomo tried to put 10- and 25-person restrictions on churches in various areas of the city.

These are just two examples of countless other situations around the country where churches are being treated less fairly than the likes of strip clubs.

It’s abundantly obvious that in the name of “staying safe,” there’s an underlying agenda that is decidedly anti-religion. What else are we to make of policies that preserve the rights and ability to operate for places like strip clubs, but churchgoers are told they can pray anywhere, and therefore don’t have to go to a church?

Gov. Northam, people of faith see through this. Take every opportunity to share how you worship, but please, don’t impose your perspective on how people should worship on the rest of the country.