What Faith-Based Efforts Can Do to Help Prevent Veteran Suicide 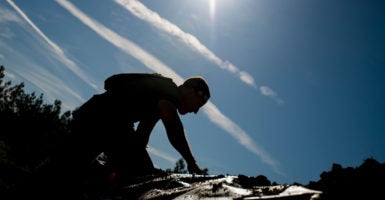 I don’t often quote sources from The New York Times, but in mid-November, David Brooks wrote a piece called “Fighting the Spiritual Void.” He stated without equivocation that “[t]rauma is a moral and spiritual issue as much as a psychological or chemical one.”

He could not be more correct.

The Heritage Foundation convened a panel to discuss post-traumatic stress disorder and veteran suicide from the faith angle. The panel was chaired by myself, a 30-year veteran of the Army Special Forces, and the members included Richard Glickstein, an advocate working to move the government to appropriately address the crisis; Dr. David LeMay, a medical doctor who specializes in rehabilitation; and Lt. Col. Damon Friedman, an active-duty Air Force special operator, who also leads a veterans service organization called Shield of Faith Missions.

The panel laid out quite a story.

Friedman presented several personal anecdotes from his own trauma, and those of some of the veterans with whom he works. The depth of despair some of our warriors face is profound, and the fact that they are not getting the help they need is discouraging. He also showed how faith-based programs like his own often take the lead in helping these veterans.

LeMay discussed the science showing the emotional, psychological, and physical effects of applying faith solutions to the rehabilitation process. A key point here is that the specific confession or organization has not proved significant to outcomes, but faith in a divine being has. All such beliefs had a beneficial effect.

Glickstein highlighted the way government efforts have failed—and offered a possible solution. He said that in the last 10 years, the Department of Defense and the Department of Veterans Affairs have together run 1,100 different programs addressing PTSD and veteran suicide, at enormous expense. During that time, the average of 21 veteran suicides per day has not changed.

And recent data actually shows the problem growing. A top VA official recently said that “[s]uicide rates among veterans 34 and younger have spiked in the last two years, leading the Department of Veterans Affairs to focus more on the 18- to 34-year-old age group than civilian programs for suicide prevention.”

The government’s effort has actually been fairly broad-minded. It offers programs that use pharmaceuticals, psychological techniques of all sorts, acupuncture and other “alternative medicine” methods, as well as individual and group approaches. Just no faith-based programs.

In fact, when Glickstein spoke with legal advisers at the Pentagon, he was told that they could not endorse such means, as there were small but vocal (and active) elements that would sue to keep such programs “out in the cold.”

Glickstein also pointed out how a major two-year study by the Defense Department on the value of faith-based initiatives was ruined. After experts created the survey questions, a team of lawyers massively revised them to be more politically acceptable. The study was carried out with these new, modified questions.

When the study was peer reviewed, researchers concluded that the lawyers had so badly adulterated the questions with their own political correctness that the results were not scientifically valid. Intentionally or not, the lawyers had killed the study in its cradle.

Such are the obstacles to pursuing faith-based solutions. Some are determinedly opposed, even as current methods of treatment continue to fail our veterans.

As we saw in the Q&A portion, even those senior leaders who did not have a personal foundation of faith still wanted these programs. They clearly articulated their desire to have every possible “tool” in the toolbox in order to assist their troops amid a personal crisis and the “soul wound” of PTSD.

One other noteworthy nongovernmental organization mentioned by the panel was Mighty Oaks Warriors. Friedman praised its track record: Of the more than 2,000 veterans with PTSD and suicide ideation who had been through the program, all are still alive today.

While no one advocated pushing troops to use faith programs, our panelists agreed on the need to make this useful option available and robust enough to handle the caseload.

Why would legal advisers fight this seeming “no brainer,” even during a presidential administration that appears to be more open to faith-based perspectives?

The answer seems to lie in the residual presence of Obama-era political correctness. It is still there, and it permeates the legal advisers’ offices and holds at bay any move to add faith back into the mix.

So what can be done today?

The panel concluded that the administration should take one of two courses. One is more bold, the other a bit more limited.

The first is for the president to issue an executive order to immediately remove all roadblocks to the inclusion of faith-based programs, and to immediately introduce such programs into both the VA and Department of Defense. This should include maximum use of the chaplaincy in both departments, mandated cooperation between the chaplains and the medical personal, and the leveraging of existing (albeit small) nongovernmental organizations like Shield of Faith Missions, which already exist around the country.

The more limited option would be for the president to mandate a study on the effectiveness of faith-based approaches, which would add to existing research. This time, the survey instruments should be left to the experts, and the lawyers should be kept away. This would not be as rapid or robust as the first option, but it would put to rest any further debate—one way or the other—as to the use of faith programs.

The panelists also agreed to convene an event in the immediate future to which senior retired leaders—generals, admirals, members of Congress, and others—would be invited. The goal would be to get VA Secretary Robert Wilkie and Defense Secretary James Mattis to address the group and commit to finding any and all ways to help our troops. They have sacrificed so much. We must make every effort to help them find healing.

The bottom line is that action is needed. We can no longer be satisfied with 21 suicides a day. The 1,100 existing programs have kept the numbers from going higher, but if faith-based approaches can lower it, they should be tried. These would not replace other methodologies, but would simply add a long-needed and potentially effective tool to a toolbox designed to help our vets.

Do we not owe them the effort to try?