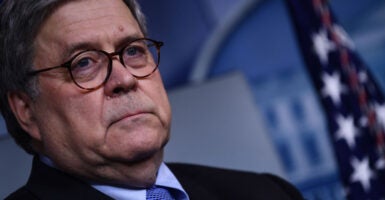 Attorney General William Barr, pictured March 23 in the press briefing room of the White House, designated a special counsel in the ongoing probe of why the FBI began to investigate Donald Trump during the 2016 campaign. (Photo: Brendan Smialowski/AFP/Getty Images)

The appointment of John Durham as special counsel likely means his probe of potential misconduct by FBI and other government officials in beginning the Trump-Russia investigation will continue well into 2021, regardless of who the president is.

One former FBI lawyer, Kevin Clinesmith, already has pleaded guilty to making false statements to obtain a warrant to spy on a Trump campaign aide in 2016.

Attorney General William Barr announced in a letter Tuesday to the House and Senate Judiciary Committees that in October he had appointed Durham, U.S. attorney in Connecticut, as special counsel for the ongoing probe.

1. How Could This Affect a Biden Administration?

A special counsel typically is someone brought in from outside the Justice Department to oversee an investigation.

But Durham, who has been overseeing the probe for 18 months at Barr’s request, will remain the special counsel on the matter even if Trump concedes the election after pressing litigation in several states.

A continuing probe by Durham doesn’t mean that Biden would be a target, said J. Christian Adams, a former Justice Department lawyer.

But, Adams said, it could complicate matters for aspiring members of a new Democratic administration who might have played a role in illegal or unethical conduct that led to unfounded allegations of collusion between Trump or his campaign and Russia.

“A lot of people who want jobs with the Biden administration will likely be affected by this and it could really impact the rest of Biden’s national security team,” Adams, now president of the Public Interest Legal Foundation, a watchdog group, told The Daily Signal.

In the waning days of Obama’s presidency, Biden and other Obama administration officials submitted “unmasking” requests for communications of retired Army Lt. Gen. Michael Flynn at a time when Flynn was Trump’s incoming national security adviser.

Barr previously named U.S. Attorney John Bash, of the Western District of Texas, to investigate Obama administration officials in that aspect of the Flynn case. Subsequent news reports revealed that Durham also was investigating the matter.

Still, Biden may be found to have been involved in related matters as the broader Durham probe plays out, said Curt Levey, president of the Committee for Justice, a conservative legal group.

“To the extent that it affects Biden by potentially implicating him in a plot against Flynn [that] would be a black mark for Biden, but wouldn’t likely affect his presidency,” Levey told The Daily Signal.

2. Could a Biden Administration Fire Durham?

The Justice Department under a Biden administration could fire Durham and end his investigation of the beginnings of the Trump-Russia probe. But that would be difficult both legally and politically, experts say.

“It was a brilliant move to appoint a special counsel because it has now boxed in the next attorney general,” Adams told The Daily Signal. “They can’t fire a special counsel without it looking like a cover-up.”

A special counsel is different from an independent counsel, who couldn’t be fired by the executive branch under the old federal statute. Still, a special counsel has considerably more leeway.

“What changes is that the attorney general can’t just tell Durham to stop doing what he’s doing,” John Malcolm, director of the Meese Center for Legal and Judicial Studies at The Heritage Foundation, told The Daily Signal. “The only way to get rid of a special counsel is to fire him for cause.”

The Justice Department’s inspector general, Michael Horowitz, issued a report in 2019 on the predicate for the Trump-Russia probe, documenting many of the department’s lapses, namely misinforming a secretive surveillance court to get a warrant to spy on former Trump campaign adviser Carter Page.

An inspector general, however, doesn’t have the power to prosecute or even to issue subpoenas.

Barr appointed Durham, a career prosecutor experienced in high-profile public corruption and mafia prosecutions, to review the case in May 2019. Durham subsequently determined that he was investigating the beginnings of the Russia probe as a criminal matter.

The Special Counsel is authorized to investigate whether any federal official, employee or any other person or entity violated the law in connecting with the intelligence, counter-intelligence, or law enforcement activities directed at the 2016 presidential campaigns, individuals associated with the administration, or President Donald J. Trump, including but not limited to Crossfire Hurricane and the investigation [by] Special Counsel Robert S. Mueller III.

Crossfire Hurricane was the name of the FBI operation that began looking into Russian meddling in the 2016 presidential election campaign but morphed into a probe of Trump and campaign associates such as Flynn and Page.

Barr’s order goes on to say that Durham “shall submit to the Attorney General a final report, and such interim reports as he deems appropriate, in a form that will permit public dissemination.”

Levey, of the Committee for Justice, said specific details of the order likely will keep the investigation focused on the origins of the Russia-Trump probe.

He noted that expanding the investigation to any other matter would require authorization from the attorney general. That would be unlikely to occur under a Democratic Justice Department.

Under the now-expired statute governing independent counsels, Starr had to get the permission of a three-judge panel before expanding the probe to look into an unrelated matter.

Thus, a special counsel has considerable autonomy, but less so than an independent counsel had under the old statute.

It’s more important that the investigation be completed and all the facts fully known, Levey said.

“What’s important is to hold people accountable and to set the record straight,” Levey said. “That’s what should be important to President Trump, is that history remembers there was a plot against him, and it’s certainly worthwhile to document that.”

Hans von Spakovsky, a former Justice Department lawyer who is a senior legal fellow with The Heritage Foundation, noted in a Fox News op-ed:

So if some former Obama administration official complains to a Biden White House or a Biden attorney general that he is being investigated, subpoenaed, or interviewed, Durham can’t be told by the attorney general to stop what he is doing unless it is ‘inappropriate or unwarranted.’ If the attorney general takes such action to squash something the special counsel wants to do, he is required under the regulation to ‘notify Congress.’ …

Most importantly, and probably the key reason why the Durham appointment was made, is that under the Justice Department regulations, Durham can only be removed from office by ‘the personal action of the Attorney General.’

However, a Justice Department regulation would not apply to the president. So, von Spakovsky added, a President Biden could fire Durham, albeit with political consequences.

“The constitutional argument can be made that any president can fire a special counsel, regardless of any Justice Department regulations,” von Spakovsky wrote. “As the Supreme Court said in 1926 in Myers v. U.S., the president’s authority under Article II, Section 2 of the Constitution to appoint officers of the executive branch necessarily carries with it the authority to remove such officers (with certain exceptions, such as federal judges).”

In his letter to Congress, Barr noted that he had anticipated that Durham’s investigation would be wrapped up sooner, but the COVID-19 pandemic created delay.

“Although I expected Mr. Durham to complete his work by the summer of 2020, the COVID-19 pandemic, as well as additional information he uncovered, prevented him from doing so,” Barr wrote in the letter to Senate Judiciary Chairman Lindsey Graham, R-S.C.; House Judiciary Chairman Jerry Nadler, D-N.Y.; and ranking members Sen. Dianne Feinstein, D-Calif., and Rep. Jim Jordan, R-Ohio, respectively.

“In advance of the presidential election, I decided to appoint Mr. Durham as a Special Counsel to provide him and his team with the assurances that they could complete their work, without regard to the outcome of the election,” Barr wrote.

Nadler, a leader in Democrats’ attempt to impeach Trump last year, strongly objected to the appointment, claiming that Barr “used the powers of his office to settle old scores for the president.” Nadler also questioned whether Durham was legally qualified for the post.

In a public statement, the New York Democrat said:

On its face, this appointment appears to violate the Department’s own regulations—which stipulate, among other requirements, that ‘the special counsel shall be selected from outside the United States government.’ The sitting U.S. attorney for the District of Connecticut is simply not eligible for the job. In addition, the Attorney General has provided no real explanation for his decision to appoint a special counsel when he did, or for his decision to delay notification to Congress until today.

Graham noted the findings of Senate hearings and the Justice Department’s inspector general’s report, and said he hopes this approach leads to accountability.

“To restore credibility to the Department of Justice and FBI after this disgraceful episode, people have to be held accountable—either through criminal prosecution or administrative action,” Graham said in a public statement.

“I have complete confidence that Mr. Durham is the right man at the right time to be appointed special counsel,” Graham said. “I hope his work product will help restore confidence in the Department of Justice and FBI after the debacle called Crossfire Hurricane.”

“We are still waiting for a report from a man named Durham who I have never spoken to and have never met,” the president said, adding:

The hardest thing I have to do is explain why all these people that got caught spying on my campaign—it has never happened before and it should never happen again to a president of the United States.