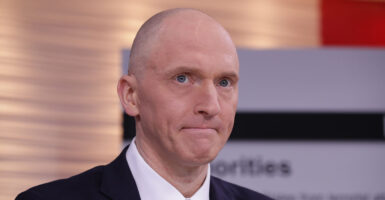 A Justice Department inspector general’s report says FBI attorney Kevin Clinesmith altered an email in June 2017 to downplay Carter Page and his relationship with the CIA. Pictured: Page participates in a discussion on 'politicization of Justice Department and the intelligence community in their efforts to undermine the president' hosted by Judicial Watch at the One America News studios on Capitol Hill, May 29, 2019. (Photo: Chip Somodevilla/Getty Images)

A former FBI attorney will plead guilty to making false statements in documents used to obtain a surveillance warrant against former Trump aide Carter Page, his lawyer told the Associated Press on Friday.

The guilty plea from Kevin Clinesmith is the first legal action taken in an investigation led by John Durham, a U.S. attorney looking into the origins of the Trump-Russia probe and other intelligence-gathering activities related to the 2016 Trump campaign.

Clinesmith’s lawyer, Justin Shur, told the Associated Press that his client will plead guilty to a single charge of making false statements as part of a cooperation agreement with the government.

The New York Times first reported that Clinesmith was entering the plea deal and would be charged in federal court.

Attorney General William Barr hinted Thursday that the indictment was coming in the Durham probe, though he said it was not “earth-shattering.” He told Fox News’ Sean Hannity that other “significant” developments will happen in the Durham probe closer to the election.

A Justice Department inspector general’s report said that an FBI attorney identified as Clinesmith altered an email in June 2017 to downplay Carter Page’s relationship with the CIA.

Page had served as an “operational contact” for the CIA through at least 2013, but Clinesmith altered an email to say that he was “not a source” for the spy agency.

Clinesmith took part in other aspects of Crossfire Hurricane, the name of the FBI investigation of the Trump campaign, and later joined the special counsel’s team.

He took part in the decision to send an FBI special agent into a counterintelligence briefing with Donald Trump and Michael Flynn in August 2016. The agent, Joe Pientka, was tasked with collecting evidence on Flynn to use as part of Crossfire Hurricane.

Clinesmith also exchanged anti-Trump text messages with another FBI lawyer after the November 2016 election, according to a Justice Department inspector general’s report released on June 14, 2018.

“I am so stressed about what I could have done differently,” Clinesmith wrote. “Plus, my god damned name is all over the legal documents investigating his staff.”

Clinesmith was one of the FBI lawyers who took part in interviews with George Papadopoulos in February 2017.

The Justice Department did not immediately respond to a request for comment.