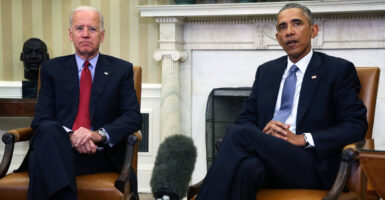 Attorney General William Barr has said that neither former President Barack Obama nor former Vice President Joe Biden is being investigated. Pictured: Obama and Biden during a Jan. 7, 2015, meeting in the Oval Office of the White House. (Photo: Alex Wong/Getty Images)

A federal prosecutor in Texas is drawing a new kind of attention by digging into the “unmasking” of Trump campaign associates that occurred in the waning days of the Obama administration.

Attorney General William Barr last month revealed to the House Judiciary Committee that he had assigned U.S. Attorney John Bash of the Western District of Texas to probe what the Obama administration did in the name of national security.

Unmasking occurs after federal intelligence agencies incidentally pick up U.S. citizens’ conversations with foreign officials who are under surveillance.

Identities of those Americans are supposed to be protected, but top government officials who are privy to intelligence reports may request that the redacted identities of specific persons be disclosed, or “unmasked.”

In the meeting, which occurred 15 days before Trump’s inauguration, they discussed Flynn, who had been chief of the Defense Intelligence Agency for two years in Obama’s second term.

This could raise the issue of abuse of power, leading some commentators, as well as Trump, to refer to the Flynn unmasking as “Obamagate.”

Barr has said, however, that neither Obama nor Biden are under investigation. The Senate Judiciary Committee also is investigating the unmasking issue.

Here are four things to know about Bash, the prosecutor directed by Barr to look into it.

John Franklin Bash III, now 37, went to work in the Trump White House counsel’s office in early 2017 as special assistant to the president and associate counsel to the president.

His wife, Zina Bash, was a member of the White House Domestic Policy Council. She previously worked for the 2016 Republican presidential campaign of one of Trump’s main rivals for the nomination, Sen. Ted Cruz of Texas.

Cruz and Sen. John Cornyn, R-Texas, both recommended that Trump appoint Bash to replace U.S. Attorney Richard Durbin. As first assistant U.S. attorney for the district, Durbin got the top job when Obama appointed U.S. Attorney Robert Pitman as a federal judge in 2014.

Cornyn said at the time: “Texans deserve a principled prosecutor with a record of accomplishment and commitment to upholding the law, and John fits the bill.”

“John Bash is a brilliant lawyer who will be an outstanding United States attorney,” Cruz said in a prepared statement when Trump nominated him. “He is committed to the fair and effective enforcement of the law, and has the integrity, judgment, and skill necessary to serve the people of the Western District as its chief federal law enforcement officer.”

Bash represented the Obama administration before the Supreme Court in 10 cases focused on national security and criminal law.

Before working in the Obama Justice Department, Bash was an associate at the Washington law firm of Gibson, Dunn and Crutcher from 2008 to 2012.

Bash clerked for both an incumbent Supreme Court justice and a jurist who would go on to serve on the high court.

From 2006 to 2007, he clerked for Circuit Judge Brett M. Kavanaugh on the Court of Appeals for the District of Columbia Circuit, whom Trump would name to the court in 2018.

4. Academics and Journalism at Harvard

While at Harvard, Bash was a staff writer for The Harvard Crimson, the campus newspaper, usually writing conservative opinion pieces.

In one 2001 commentary, he argued for bringing ROTC back to Harvard’s campus. That same year, he wrote a piece on why conservatives should oppose capital punishment.